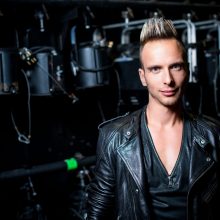 Abracadabra! On Wednesday, July 22, at 6:30 p.m., magician and illusionist Leon Etienne will give a White Plains Public Library performance via Zoom. “Most of it will be live, but I hope to open with highlights of my best stunts,” he says.

Illusory stunts have been prerequisites for every magician since Houdini, but the Utica, N.Y.-based Etienne has more recent role models. “While growing up in the 1990s, I would watch NBC‘s The World's Greatest Magic every Thanksgiving eve, which featured Lance Burton and Penn & Teller. Further inspiration came from my grandparents giving me Mark Wilson's Complete Course in Magic. All were springboards to my performing since I was 12 years old.”

Etienne's repertoire has taken him to every continent except Antarctica, and he has wowed them in places varying from Las Vegas and New York (Radio City Music Hall) to Chinese Macau and the South Pacific island of Saipan. His TV gigs have included The Tonight Show Starring Jimmy Fallon, America's Got Talent, and appearances on two CW shows airing this summer: Penn & Teller: Fool Us! (Mondays) and Masters of Illusion (Fridays).

Etienne has a business degree from Syracuse University, “which is where I learned to market myself. A decade ago, I performed at the Utica Public Library when Josh Carlson was youth services director. Josh now being in White Plains in the same capacity was the link to my coming here.”

For more information on attending this virtual event and to access the Zoom link, visit the event listing here.