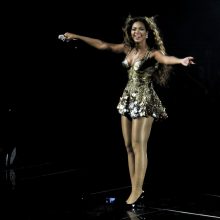 White Plains Cardholders just gained access to another exciting resource with the addition of Qello. Qello Concerts by Stingray is the world’s largest collection of full-length concerts and music documentaries streamed on-demand to just about any digital device. It’s like a never-ending concert ticket, which means it's perfect for this time when many are missing going to live shows.

If you're unsure where to start, check out these recommendations from Adult Services Librarians Austin Duffy, Mariel Perez, and Kristen Thornton-De Stafeno.

The Highwaymen, Live American Outlaws
The Highwaymen were a country supergroup consisting of Willie Nelson, Waylon Jennings, Johnny Cash, and Kris Kristofferson. Here are 35 tracks from their 1990 concert at Nassau Coliseum, with each artist singing his greatest hits with help from the other three and a great backup band.

Rod Stewart, It Had to Be You
Stewart's renditions of these classics from the Great American Songbook are almost twenty years old but still a pleasure to listen to. He highlights the beauty of the songs' lyrics and makes one appreciate the music of that bygone era. In addition, there are nine of Stewart's own hits, like “Maggie May” and “Forever Young.”

Shakira, Live from Paris
I selected this performance after watching Shakira perform at the Super Bowl. This was definitely a great concert where Shakira dances the entire show, showing her amazing singing and dancing skills. The video is sharp, the sound is great, and the concert exciting. This concert is edited into short segments which allows you to fast forward to your favorite songs. “Waka waka,” her last performance, was my favorite. It delivered a powerful message for a better Africa. This concert would appeal to any music lover.

Beyoncé's I Am… World Tour 2010
I found this concert to be very entertaining and highly energetic. All the songs and the graphics are amazing! The behind the scenes is a plus. Beyonce never disappoints. Loved the interaction with the audience. Even after full-out singing and dancing she showed no sign of fatigue.

Björk, Biophilia Live 2014
When you first hit play, you might think you're watching a nature documentary between the visuals and the opening narration from David Attenborough. If you're already a Björk fan, though, this won't surprise you as her album of the same name uses nature in its metaphors for love and loss. This concert is very much a physical embodiment of the album, for as Attenborough remarks “…in Biophilia, you will experience how the three come together: nature, music, and technology.” This is a performance like no other, both beautiful and mesmerizing.

Lauryn Hill, MTV Unplugged 2001
There's always been something special about MTV: Unplugged sessions. Nirvana's (with their cover of David Bowie's “The Man Who Sold the World”) is probably one of the most iconic, and Lauryn Hill's is one of the most anticipated as it came four years after her classic album The Miseducation of Lauryn Hill. It's special both for the history of it—it was her first departure from hip-hop to folk—and for the emotion in her performance and her spoken interludes where she discusses her life and artistic struggles. Qello features a number of MTV: Unplugged sessions, but fingers crossed they add Florence + the Machine's from 2012 where you may spy a certain librarian singing along.