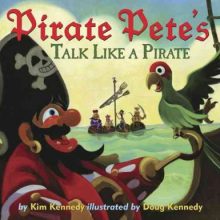 Avast! Get yar stern to a comfy couch or deserted isle, prop up yer peg leg and get to reading some of these thar piratical reads!  Before I make ye walk the plank!

Saturday, September 19th is International Talk like a Pirate Day. When you're finished reading, try one of these Seafaring Activities or else you'll have to swab the deck ye scurvy dog!

The Pirate Princess by Sudipta Bardhan-Quallen
Some princesses may like tea and fancy parties, but Princess Bea would prefer sailing upon the briney deep in this tale of girl power on the high seas.
Library Catalog 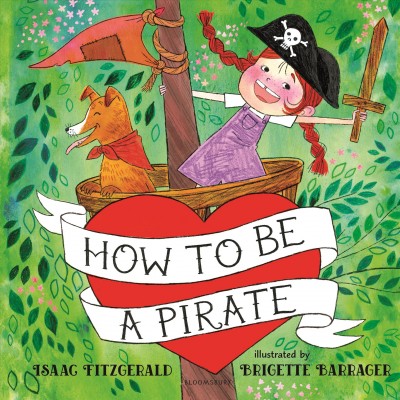 How to Be a Pirate by Isaac Fitzgerald
CeCe wants to be a pirate, but the neighborhood boys tell her she can’t be because she’s a girl. Well, those scurvy dogs no nothing about what a girl can and can’t do!
OverDrive; Library Catalog

Captain Flinn and the Pirate Dinosaurs by Andreae Giles
When Flinn discovers a secret passageway in his school supply closet, he embarks on a crazy swashbuckling voyage!
Library Catalog 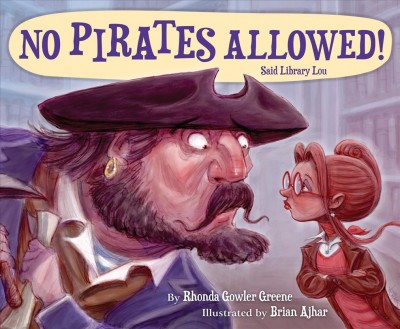 No Pirates Allowed! Said Library Lou by Rhonda Gowler Greene
A pirate has come to the library looking for a hidden treasure, but Lou the librarian knows how to handle this scallywag and finds the library’s real treasures.
Library Catalog

Arr, Mustache Baby! by Bridget Heos
The baby with the flowing ‘stache swoops in to be a swashbuckling hero, but the lure of piracy is too much for him to bear!
OverDrive; Library Catalog 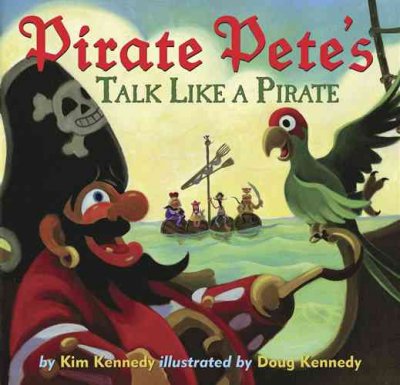 How I Became Pirate by Melinda Long
Jeremy Jacob joins a pirate crew, but quickly realizes that being a pirate might not be as fun as he thought.
Library Catalog

Pirates Don’t Change Diapers by Melinda Long
The pirates return looking for treasure in Jeremy Jacob’s backyard, only to discover that he has a baby sister.
OverDrive; Library Catalog

Goldenlocks and the Three Pirates by April Jones Prince
In this seafaring take on the classic Goldilocks story, Goldenlocks boards the ship of three pirate scallywags.
OverDrive; Library Catalog

Peter Pan by J.M. Barrie
This classic story has captivated children all over the world. Fly with Peter, Wendy and her brothers to Neverland. You will meet a Native American princess, mermaids and the infamous Captain Hook.
OverDrive; Library Catalog

Pirate Pedro/Pedro el Pirata by Fran Manushkin
Pedro and his mates want to become pirates. There’s only one problem–they have to decide who will become the captain. This book is available in English and Spanish.
OverDrive; Library Catalog

Lintang and the Pirate Queen by Tamara Ross
Adventure, fantastical monsters, life-and-death battles, await young Lintang as she joins a fearsome pirate crew in this novel populated by an incredibly diverse and inclusive cast of characters.
OverDrive; Library Catalog

What If You Met a Pirate? by Jan Adkins
In-depth knowledge of everything piratical, from how to sail a ship, to firing cannons and pirate boarding strategy, to why pirates wore golden earrings. (The earrings pay for their burial when a pirate washes ashore after drowning!)
Library Catalog

DK Findout! Pirates by DK Publishing
Swashbuckle your way to the realm of pirates. Learn everything you need to know about pirates through the ages, from pirates in the Caribbean to 17th century Vikings. These mythical figures come to life as you discover pirate ships and read about walking the plank. Discover different flags and learn how to read a treasure map!
OverDrive; Library Catalog

101 Amazing Facts about Pirates by Jack Goldstein
Learn about the notorious pirates such as Blackbeard: did you know that his ship was called Queen Anne’s Revenge? Meet the man who introduced words like avocado and cashew to the English language. Learn about treasure, pirate maps and pirate lingo, such as “blimey.”
OverDrive

Do You Want to Be a Pirate? by John Malam
So, you’re interested in joining a pirate crew, are ye? Here’s the skills ye need to not be a lily-livered landlubber. Take the test at the end of the book to see if ye learnt what it takes to be a mate on a pirate ship!
Library Catalog

Pirates: Dead Men’s Tales by Anne Rooney
Real life stories of pirates and their adventures along with the history of pirates and piracy around the world.
Library Catalog 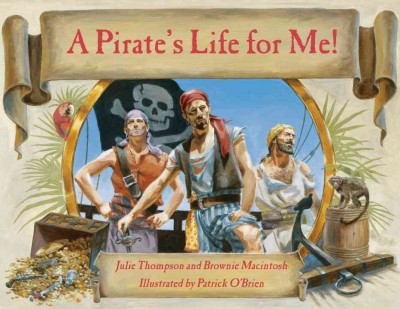 A Pirate’s Life for Me: A Day Aboard a Pirate Ship by Julie Thompson
Beautiful, classic illustrations accompany this account of daily life as a seafaring pirate.
Library Catalog

The Mermaid, the Witch, and the Sea by Maggie Tokuda-Hall
A tale of love and magic aboard a pirate ship.
OverDrive