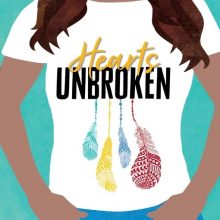 November is National Native American Heritage Month. I wanted to focus on a book that depicts Native people in the present day; too often, the image of Native people in popular culture is stuck in the past. In our reading, we can become more familiar with the lives and experiences of Native people today. For more books that offer insight into the many aspects of life as a Native teen, check out this blog by Debbie Reese of Nambé Pueblo; Reese is a noted scholar on the subject of Native peoples’ representation in children and YA books, and her blog is a wonderful resource for discovering more Native stories.

This month, I read Hearts Unbroken by Cynthia Leitich Smith. Hearts Unbroken follows high school senior Louise Wolfe, who, like the author, is a member of the Muscogee Creek Nation. Louise and her little brother Hughie have just moved to Kansas, where they attend a mostly white high school. When Hughie and two other students of color are cast in major roles for a production of The Wizard of Oz, racist parents band together to take action. Louise covers the escalating tension in her capacity as reporter for the school newspaper. As she pushes back against racism in her community, Louise offers well-reasoned explanations to friends about why certain behaviors are problematic. At the same time, she makes her own mistakes with friends, and works to repair the damage.

Hearts Unbroken is available in print through our library collection, and as an eBook through OverDrive and Hoopla.

More YA Fiction by Native and Indigenous North American Authors: 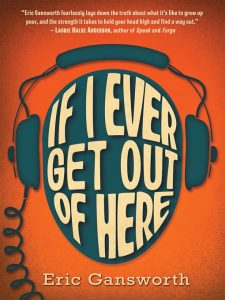 If I Ever Get Out of Here by Eric Gansworth
Grades 6 and up
OverDrive; Library Catalog
“In 1970s upstate New York, Lewis Blake inhabits two separate universes: the reservation where he lives in poverty with his mother and uncle, and school, where the fact that he is American Indian (and his sardonic sense of humor) has made him an outcast and a victim of bullying. The seventh grader has begun to accept his status until a new kid shows up in his class. George Haddonfield grew up on air force bases around the world and doesn't seem to know or care about the divisions between the reservation kids and everyone else…. Can a love of rock and roll overcome all?” –School Library Journal 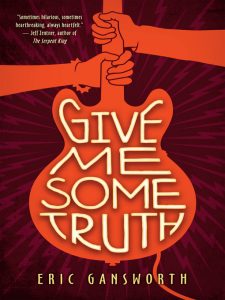 Give Me Some Truth by Eric Gansworth
Grades 9 and up
OverDrive; Hoopla; Library Catalog
“Wannabe musician Carson Mastick is approaching his senior year of high school, vacillating about whether to stay at home on the Tuscarora Reservation in upstate New York or pursue his dream of using his band as a way to get out. Fifteen-year-old Magpie Bokoni is dealing with the opposite situation: Her mother, who sells traditional souvenirs to tourists, decides to uproot the family from the city and move them back to the reservation. Magpie joins Carson's band as a way of settling back into rez life, and her love for the Beatles, John Lennon, and Yoko Ono is infused throughout the story.” –Kirkus Reviews 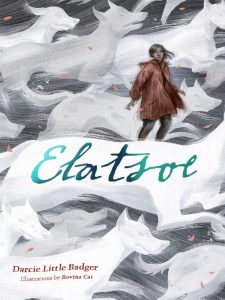 Elatsoe by Darcie Little Badger
Grades 6 and up
OverDrive; Hoopla; Library Catalog
“Elatsoe (Ellie) is a Lipan Apache teen who lives in Texas, where bizarre supernatural occurrences are the norm and people encounter magic, monsters, shape-shifters, and various supernatural events beyond reason. Ellie has inherited the spiritual skills of her people and has raised the ghost of her dog Kirby. A shimmering mass, Kirby is a loyal companion who alerts Ellie to danger and has the ability to move through walls. Ellie uses her supernatural abilities and keen observation skills to investigate the gruesome, suspicious death of her cousin Trevor.” –School Library Journal 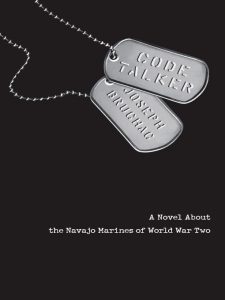 Code Talker by Joseph Bruchac
Grades 6 and up
OverDrive; Hoopla; Library Catalog
“Protagonist Ned Begay starts with his early schooling at an Anglo boarding school, where the Navajo language is forbidden, and continues through his Marine career as a ‘code talker,' explaining his long silence until ‘de-classified' in 1969. Begay's lifelong journey honors the Navajos and other Native Americans in the military, and fosters respect for their culture.” –School Library Journal 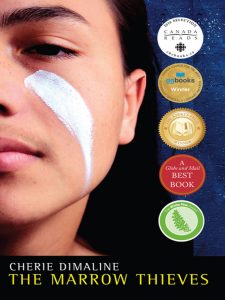 The Marrow Thieves by Cherie Dimaline
Grades 8 and up
OverDrive; Library Catalog
“In a dystopian future, a young Métis boy, Frenchie, comes of age while fleeing capture. Along with a group of Indigenous young people and their leader, Miig, they resist the constant threat of being harvested for their dream-carrying bone marrow. Growing up on the run, Frenchie learns how to hunt, trap, and keep moving north to survive, but climate change has caused chaos and collapse around the world. The group must escape the Recruiters, who cause loved ones to disappear forever, and adapt to harsh conditions.” –School Library Journal 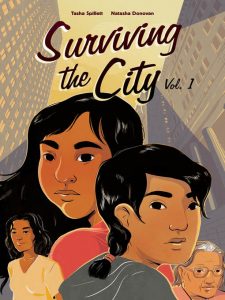 Surviving the City by Tasha Spillett and Natasha Donovan
Grades 7 and up
OverDrive; Hoopla
“Miikwan and Dez are Indigenous Canadian teens. Miikwan, who is Anishinaabe, has lost her mother. Dez, who is Inninew, lives with her grandmother (or kokum). The girls are best friends—like sisters—who completed their yearlong Berry Fast together (which teaches girls entering womanhood patience)…. In this harrowing but hopeful tale, illustrator Donovan (The Sockeye Mother, 2017) and author Spillett spotlight the problem of ‘Murdered and Missing Indigenous Women, Girls, and Two-Spirit People.'” –Kirkus Reviews 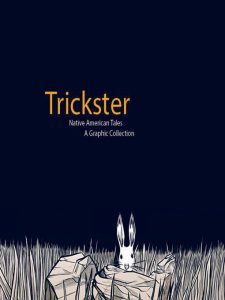 Trickster: Native American Tales, A Graphic Collection edited by Matt Dembicki
Grades 5 and up
OverDrive
“Vigorously rendered in striking graphic format, this robust anthology of 21 Native American folktales features a bevy of wily rascals in a veritable smorgasbord of trickster tales. Told in the words of Native American storytellers from many nations, these tales use the trickster to teach moral lessons and explain such natural events as how the rabbit got its puffy tail, why the buzzard has no feathers on its head, why the owl guards burial sites or why geese fly in a V formation.” –Kirkus Reviews