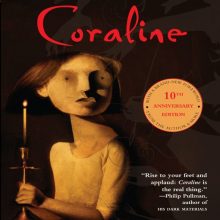 Are you looking forward to Halloween as much as I am? This year we might be limited in our normal Halloween activities due to COVID, but there are still some fun things to do. You can dress up and take photos with your family! In the past two years, I have had fun dressing up as Wednesday Addams and Punk Eleven from Stranger Things Season 2, Chapter 7: “The Lost Sister.”

You can also treat yourself to a movie marathon. Some of my favorites include Beetlejuice, Practical Magic, Shaun of the Dead, The Nightmare Before Christmas, and It’s the Great Pumpkin Charlie Brown.

Or, you can check out some of these great books to get into the Halloween spirit. From picture books to graphic novels, you're sure to find a scare-tastic tale! 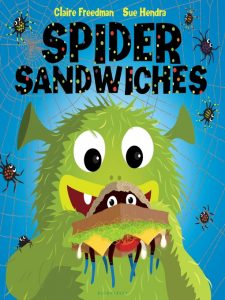 Spider Sandwiches by Claire Freedman
Meet Max! Max loves eating icky, yucky foods such as beetle cookies and spiky ants from space. He even has a monster cookbook that teaches him how to make eel-noodles and pickled worms! Max loves his spider sandwiches, but there is one horrific meal that can scare him off… This is a delightful book for kids who love creepy crawlies! 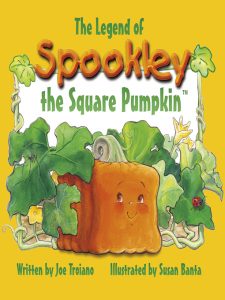 The Legend of Spookley the Square Pumpkin by Joe Troiano
Meet Spookley. He is different from other pumpkins. He isn’t round and plump–he is a square. But just because you are square doesn’t mean you can’t be brave! A wonderful story about the importance of acceptance. 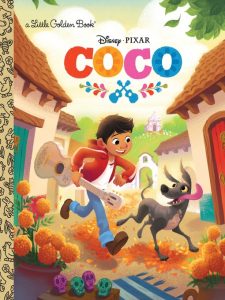 Coco Little Golden Book by RH Disney
Based on the Disney movie Coco this Little Golden Book is a delight for anyone who loves the film. Miguel wants to become a musician. While his family isn’t too thrilled about it, Miguel doesn’t give up. He finds himself in the Land of the Dead, where he can finally unravel the secrets of his family’s history. 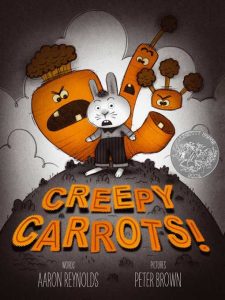 Creepy Carrots! by Aaron Reynolds
Jasper loves carrots. He loves eating them before school, yanking them from the ground and chomping on them. Then, one day, Jasper notices that the carrots are following him. When he turns around, Jasper realizes that it’s just his imagination…or is it? 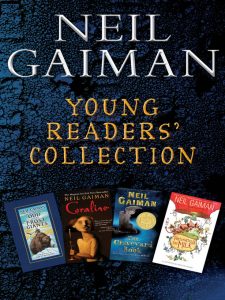 Coraline and The Graveyard Book by Neil Gaiman
Neil Gaiman is a gifted writer who has a way with the fantastical and the occult. Two of my favorite books are Coraline and The Graveyard Book. In Coraline, we meet a young girl who discovers a door to a parallel universe where life seems more adventurous and free… that is, until she realizes the horrific truth. In The Graveyard Book, Nobody (or “Bod” for short) is raised by ghosts in a cemetery after the death of his parents. Bod yearns to learn all that he can in and out of the graveyard; however, his life will be in danger if he leaves the protection of his graveyard companions. 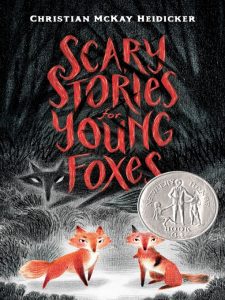 Scary Stories for Young Foxes by Christian McKay Heidicker
Mia and Uly get separated from their litter and venture into the forest and embark on an adventure. The forest is scary, dark, and full of menacing creatures, including zombies, witches, and ghosts. 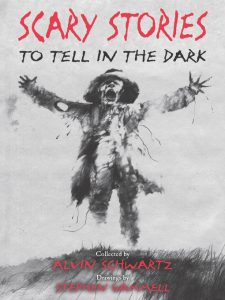 Scary Stories to Tell in the Dark by Alvin Schwartz
In the tradition of all things spooky, Scary Stories to tell in the Dark contains gruesome short stories that will haunt you. Discover the world of graveyard dares, a mysterious basket and a deadly dress. These scary stories can be re-told around a campfire for best effect, or in a dark room with a flashlight. 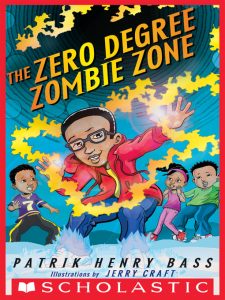 The Zero Degree Zombie Zone by Patrik Henry Bass
This book is illustrated by Jerry Craft, author of New Kid, the first graphic novel to win the Newbery award. Bakari is trying to make it through school without being bullied, until he finds a ring with magical powers and discovers that beings from another dimension want it back! 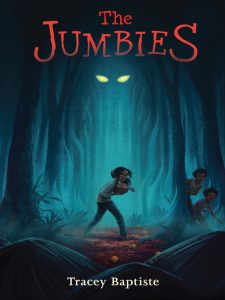 The Jumbies by Tracey Baptiste
This book is based on Caribbean folklore. Meet Corinne La Mer, a brave young girl who isn’t scared of anything, especially not the jumbies, or trickster forest spirits featured in the elders’ stories. However, once Corrinne sees yellow eyes, she realizes that the Jumbies aren’t just stories. Corinne must use an ancient magic–her gift–to help out her village. 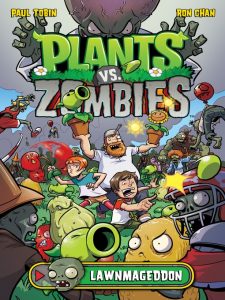 Plants vs. Zombies (2013 v. 1) by Paul Tobin
If you love the Plants vs. Zombies games, you will also love this comic. Dave and his niece Patricia try to save their neighborhood from a zombie invasion. Can an army of zombies be raised to destroy the neighborhood? Or will Patrice, Dave, and the plants team up to defeat the Big Zombie boss? 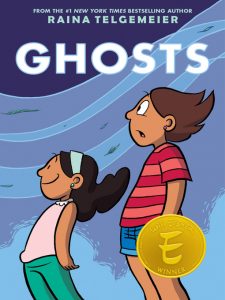 Ghosts by Raina Telgemeier
Rania Telgemeier uses her own childhood experiences to tell the story of two sisters, Catrina and Maya. When Catrina and Maya move to Northern California, their family is hoping that the fresh air in Bahia de La Luna might help Maya, who has Cystic Fibrosis. However, two girls are in for a surprise: Bahia de La Luna is also haunted! Catrina isn't interested in meeting ghosts, but Maya wants to make new friends! As Dia de Los Muertos approaches, the girls must figure how to reunite with their loved ones and deal with the ghosts who are interested in visiting and maybe helping them. 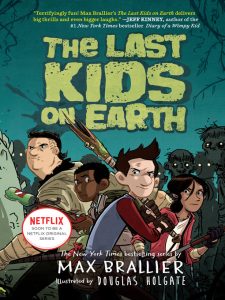 The Last Kids on Earth by Max Brallier
What to do when the zombie apocalypse visits your neighborhood? Jack is safe in his treehouse, but he is only buying time. He builds a team with his friends to defeat Blarg. If you want to know what it’s like to fight zombies with your friends, this is the perfect book for you! 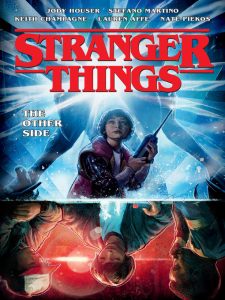 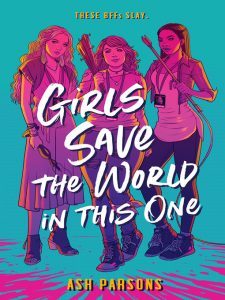 Girls Save the World in This One by Ash Parsons
June, Imani, and Siggy are thrilled to finally have the chance to attend ZombieCon–until other fans start actually becoming zombies! A comedic take on gruesome creatures. 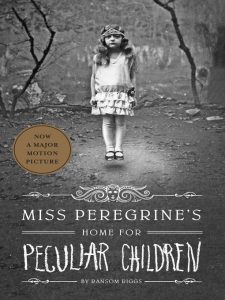 Miss Peregrine’s Home for Peculiar Children by Ransom Riggs
Enter an odd tale where a young boy, Jacob, travels to unravel the mysteries of his grandfather’s past. We see peculiar pictures and read about a strange island that holds the ruins of an old orphanage where Jacob’s grandfather once lived. A strange thriller and a treat for Halloween! 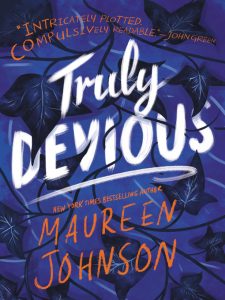 Truly Devious by Maureen Johnson
Stevie Bell arrives at a remote boarding school determined to solve the notorious cold case murders that took place 80 years before. When a fellow student ends up dead, Stevie wonders if the murderer has somehow returned? This book has a cliffhanger ending, so make sure you have the second and third books in the series lined up! 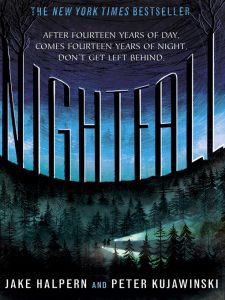 Nightfall by Jake Halpern and Peter Kujawinski
On an island where night lasts 28 years, twins Marin and Kana are mystified by the strange rituals their neighbors are performing in preparation for nightfall. When their friend Line goes missing, there is little time to rescue him before night comes. 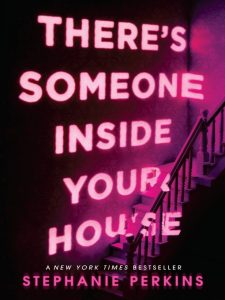 There's Someone Inside Your House by Stephanie Perkins
When girls begin disappearing in Makani's town, secrets from her past begin to surface. With a title like this, make sure you don't stay up reading this one too late at night.