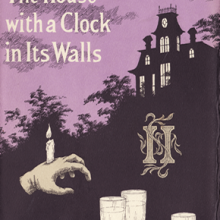 Reads Revisited is a blog series where Trove and Edge Librarians revisit some of their favorite childhood stories. In today's column, Manager of Youth Services Josh Carlson revisits The House with the Clock In Its Walls (Catalog / OverDrive) and The Curse of the Blue Figurine (Catalog / OverDrive) by John Bellairs.

Before I started reading, I spent some time thinking about my memories of these books. In my mind, they feel like they were important in my childhood in some way. I remember them spooky, fun and filled with adventure. I couldn’t put them down. As a rule, I don’t like horror as a genre, at least as what most people consider “horror” today, but I do enjoy atmospheric and macabre spookiness – Gothic horror, Victorian horror, monsters and dark magic. Bellairs’ novels were never scary, as I remember, but filled with moments of spooky dread and mystery. I can definitely see my interest in the writings of authors such as Poe, Bierce and Lovecraft beginning in my memories of reading John Bellairs. 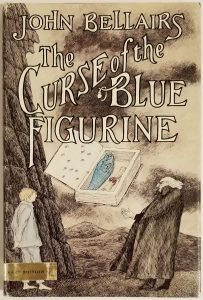 I also remember the artwork vividly — the covers and interior illustrations by the one and only Edward Gorey. Gorey is, probably, more relevant to my memory of these novels and their status as “important” in my childhood reading than perhaps Bellairs. Oh, that dark, twisted art. Exuding strangeness. Between the Bellairs novels, the copy of The Gashlycrumb Tinies I read in my small town’s library, and the animated opening to the PBS series Mystery!, Gorey’s morbid art was rather influential on my development. I distinctly remember trying to turn on the TV whenever Mystery! was on just to watch Gorey’s animation. I must not have ever actually watched the rest of the show, however (I was quite young at the time), since just in the writing of this I have discovered that Vincent Price hosted it. Perhaps, I shall now have to investigate Mystery!

So, how did these books from my childhood stand up, having revisited both The House with the Clock In Its Walls (the first in the Lewis Barnavelt series) and The Curse of the Blue Figurine (the first in the Johnny Dixon series) so many years later? Was I let down by the expectations created by the impressions of my youth?

Bellairs’ writing probably can’t actually compare to what thirty years in my memory have built it up to be. My major issue, though, while reading ends up being more about when the novels take place – the early 1950s. I think that as a child in the 1980s, I may have still been able to relate more to the world Johnny Dixon and Lewis Barnavelt inhabit. Twenty five to thirty years is a much more relatable distance of time and experience than seventy, especially when the last forty of those seventy years have seen such a drastic change in technology as well as the lives of children in general. Even as an adult, some of what happened seemed ludicrous, not because it was supernatural, but because having an iPhone would have solved an issue. I think that is why a show like Stranger Things works so well because it is before instantaneous communication and a state of constant connectedness. I was recently watching early episodes of The X-Files and realized the mystery and suspense of the show wouldn’t work if Mulder and Scully had cell phones (maybe that’s why the revival did not interest me). If I, who can remember being a child without modern technology can have that issue while reading, I can only imagine what response a child of today would have.

On the other hand, Bellairs definitely delivers for atmosphere, mystery and style. There is a very pulp style to his novels which is, in and of itself, evocative of the writings and radio dramas (like Johnny listens to in The Curse of the Blue Figurine) of the 1950s. These same pulp stories would influence major cultural touch points like Star Wars and Indiana Jones which were, of course, of the same era as Bellairs’ writing and huge parts of my childhood. Also, I could see my child-self very much in his characters – Johnny Dixon, especially. Without a doubt, I can see why I loved his books as a child and how they impacted me well into adulthood. So in that way, they ultimately do live up to my expectations.

Final verdict: While they are perhaps a bit dated, I imagine that there are plenty of young readers looking for quick, spooky, mysterious reads that will also love these Bellairs’ books and form long-lasting memories of them. 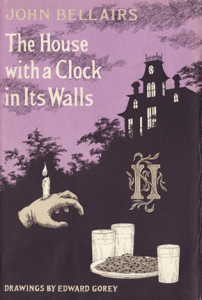