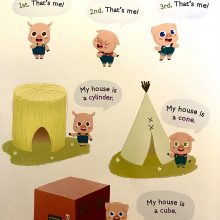 There are many, many versions of The Three Little Pigs — from traditional retellings, to ones with other animals such as fish and sharks, to ones with other things like trucks or tamales, to, of course, several versions that tell how badly the wolf was maligned in the original tale. This being Peculiar Picks, however, I wanted to pick three versions of The Three Little Pigs that are my favorites and also interesting and unique.

The Three Little Pigs Count to 100 by Grace Maccarone, illustrated by Pistachio
OverDrive / Library Catalog
My daughter owns this version because we love it so much. Pistachio’s illustrations are playful and fun, with big-eyed pigs, a blue-furred wolf, and memorable characters like the cranky Queen of Hearts and the concerned Gingerbread Man. Maccarone creates a fanciful jaunt through fairytale land that infuses the story with some basic math and geometry concepts. Colorful, fun, and full of numbers, this book gets a 100! from my daughter and I! 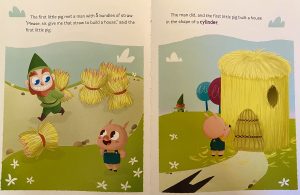 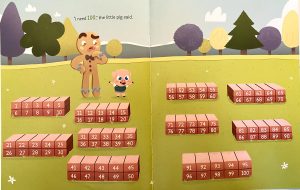 The Three Little Pigs: an architectural tale by Steven Guarnaccia
Library Catalog
These are most definitely not the three little pigs you know by heart. Traditionally, the first two pigs are usually not as smart as the third and make poor choices in their building plans. In this version, Guarnaccia, who is an illustrator, designer, and Associate Professor of Illustration at Parsons School of Design, makes all three intelligent and accomplished architects that just follow different schools of design. While the third pig’s house, made of stone and concrete and based upon the work of Frank Lloyd Wright, is the one to survive the greaser wolf’s huffing and puffing, the others fall due to strength of building materials, not strength of design. Packed with references to the work of famous designers and architects, but also a fairly straightforward telling of the traditional tale, this is one of my favorite versions. 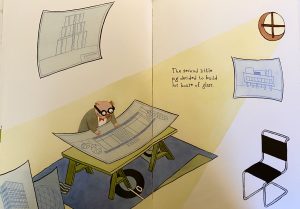 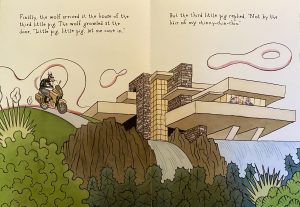 The Three Ninja Pigs by Corey Rosen Schwartz, illustrated by Dan Santat
OverDrive / Library Catalog
I’m a big fan of Dan Santat’s artwork. Schwartz’s hilarious rhyming text is perfect for Santat’s action-heavy style. While her brothers don’t stick with their Ninja School training, the third pig studies karate, eventually earning a black belt after much time and practice. When the wolf arrives, he makes short work of the first two who did not study hard enough, only to run away when Pig Three demonstrates her skill. The Three Ninja Pigs is funny, action-packed, and introduces a number of Japanese words. It is also a girl-positive story that shows the importance of perseverance, commitment, and that physical violence is not always necessary to win a fight. In addition, Pig One and Pig Two, unlike in many versions where they just move in with the third pig, actually learn a lesson and go back and study their martial arts becoming masters so that all three can open a dojo together. If you like Schwartz and Santat’s take on The Three Little Pigs, you’re in luck because they have also collaborated on versions of Little Red Riding Hood, Hansel and Gretel, and Goldilocks. 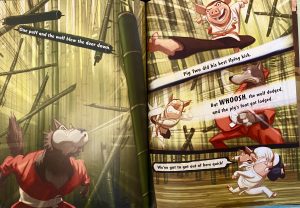 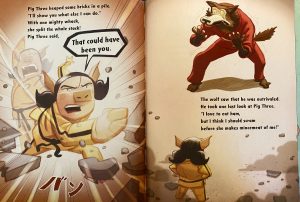