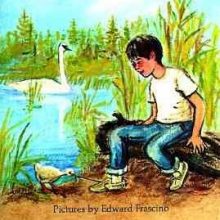 Reads Revisited: The Trumpet of the Swan

Reads Revisited is a blog series where Trove and Edge Librarians revisit some of their favorite childhood stories. In today's column, Edge Librarian Kathlyn Carroll revisits The Trumpet of the Swan (Catalog) by E. B. White.

I was so excited when Ashley came up with the idea for this series of blog posts re-examining a favorite childhood book. I immediately thought of Trumpet of the Swan by E. B. White, which I read over and over again in early elementary school. I was a serial re-reader; on trips to the school media center, my second grade teacher began requiring me to check out a new book in addition to a familiar one. While I still enjoy re-reading old favorites, it’s been many years since I picked up this particular book.

The Trumpet of the Swan begins on a remote lake in Canada. Eleven-year-old Sam Beaver is exploring near his family’s cabin when he finds the lake and sees a pair of Trumpeter swans building a nest. Over several weeks of visits to the lake, Sam witnesses the hatching and babyhood of a group of cygnets. White describes the wild setting so vividly, using soothing sensory detail to capture the feeling of being immersed in nature. I remember feeling certain, as a child, that I would one day travel through the swamps and forests of Canada to observe a swan family of my own. As an adult, just reading these calm nature scenes had a very calming effect.

Shortly after the cygnets hatch, the mother and father swans realize that one cygnet, Louis, lacks the ability to trumpet. Louis embarks on a quest for an alternate means of communication. In a series of events that require the reader to suspend disbelief entirely, Louis tracks down Sam Beaver at his Montana home and enrolls in the first grade. After learning to read and write, Louis returns happily to his family, only to realize that his newfound writing skill is useless on the lake since other swans cannot read. When Louis falls head over heels into unrequited love, it is his lack of a voice that keeps him from being a contender for the heart of his chosen swan, Serena. Seeing this, Louis’ father flies to a music shop in Billings, Montana, where he steals a trumpet for his son and causes quite a ruckus. Louis is grateful for his father’s efforts, and resolves to repay the music store and redeem his disgraced father’s reputation. Louis goes out into the world in search of a paying job. 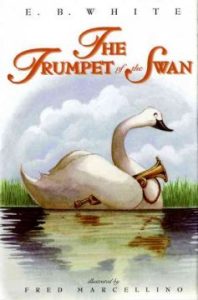 In places, it’s pretty evident that this book was written in 1970. Traditional gender roles appear standard. In one instance, a teacher singles out a female student to answer a word problem about the number of ounces in a baby bottle, while a male student is asked to calculate walking distance. Later on, Louis makes a monumental decision on Serena’s behalf without consulting her at all. Then there’s the fact that, when Louis’ parents first notice and discuss his silence, they use the word “defective” to describe him. Perhaps this was the accepted term at the time, but today it sounds very harsh. I also questioned the central premise that Louis needed a trumpet in order to be a fully functioning and valuable member of swan society. This seemed like a pretty ableist attitude to me.

Finally, I remember finding this book somewhat amusing, but in re-reading, I realize much of the humor must have gone over my head. The male swan, or the cob, is incredibly verbose and vain, in a way that manages to be both irritating and endearing at the same time. The practical mother swan tolerates his monologues with exasperation, love, and gentle redirection. As an adult, I find their interactions truly hilarious. There were plenty of other absurd moments and funny little comments that I caught this time around. This book would make for a great family read-aloud, since both parents and children will enjoy the book in different ways. I thoroughly enjoyed the experience of re-reading and finding new elements to appreciate in this old childhood favorite.