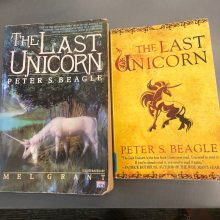 The Last Unicorn, by Peter S. Beagle, is one of my favorite fantasy novels. In this timeless tale, a unicorn discovers that she is the last of her kind. She sets on a quest to find out what has happened to all of the other unicorns. In her hero’s journey, she must first free herself from the sorcerer, Mommy Fortuna, who collects magical creatures for her midnight carnival. The unicorn befriends a foolish, bumbling magician, named Schmendrick. Schmendrick helps her escape so that she can find the other unicorns. They travel with Molly, a cook for a band of outlaws, who is sad about finally seeing the unicorn at an old age.

To free the other unicorns, the last unicorn must defeat the terrifying red bull, who serves King Haggard. King Haggard has captured the unicorns to watch them from his castle; it is the red bull that keeps the unicorns from escaping. In order to protect the last unicorn from King Haggard, Schmendrick places her under a spell. She then emerges as a mortal–Lady Amalthea. As time passes, Lady Amalthea must remember her true immortal nature as a unicorn to help her kin. 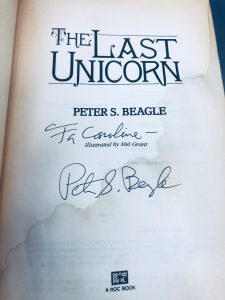 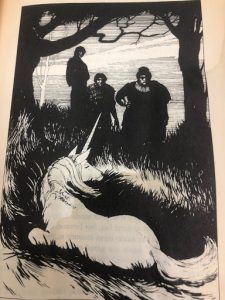 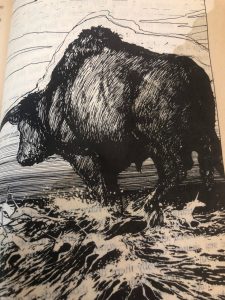 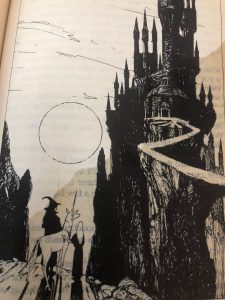 The Last Unicorn is very dear to me. This was the first film that I saw in the theatre in Tehran, Iran. I then read the book in my early teens and saw the film again as an adult during a special screening. I was also lucky enough to meet the author, Peter S. Beagle, who had sparked my imagination to write and draw stories about unicorns for years.

Reading this book again as an adult is fascinating. Like most fantastical tales, The Last Unicorn is filled with many elements found in other fantasy books: a witch (Mommy Fortuna,) magical creatures (a harpy and a fiery red bull,) spells, and a stubborn old king (King Haggard.) The book also weaves in themes of hope, loss, courage, love, and friendship.

The first element that struck me, re-reading this book, is the lyrical use of language:

Time had always passed her by in the forest but now it was she who passed through time
as she traveled. The colors of the trees changed, and the animals along the way grew
heavy coats and lost them again; the clouds crept or hurried before the changing winds,
and were pink and gold in the sun or livid with storm. Wherever she went, she searched for
her people, but she found no trace of them, and in all the tongues she heard spoken along
the road there was not even a word for them anymore (p. 8).

There are many beautiful passages that echo a similar sense of nostalgia, the passage of time, and isolation. As an immigrant, and as an adult, I can see what made me fall in love with the book and the film. The Last Unicorn yearns for home and to find her people. I appreciate this sort of sentiment–searching your surroundings for others who are like-minded. As a child, I wasn’t aware of that deep longing; I simply enjoyed the adventure and was obsessed with unicorns.

As an adult, I also see the similarities between The Last Unicorn and my other favorite fantasy books: The Hobbit and Lord of The Rings by J. R. R. Tolkien, and Alice’s Adventures in Wonderland by Lewis Carroll. In one passage, Schmendrick, the magician, uses a riddle (Why is a raven like a writing desk?) to keep Rukh, a carnival worker, busy as he helps to free the unicorn. This is a gentle nod to the chapter Riddles in the Dark in The Hobbit, when Bilbo first meets Gollum. The same riddle can also be found in Alice’s Adventures in Wonderland, when the Mad Hatter poses the same question to Alice at a tea party. In addition, there are songs and poems throughout the book, sung by Lady Amalthea, a silly butterfly, and Schmendrick the Magician. This is a nice reminder of how stories were oral in tradition.

As an adult, I am fascinated by the descriptive language, symbolism, mythology, medieval literature, and the hero’s journey. As a child, I loved unicorns and longed for heroic quests. I was also terrified of the red bull. As a child I had no concept of symbolism or metaphors, but now I can appreciate the red bull as a metaphor for greed. The red bull is also a symbol of fear, as Molly explains to Schmendrick who is afraid of the red bull: “I’ve come to think the bull’s nought but the pet name you give your cowardice” (p. 79).

The Last Unicorn is a timeless tale that has captivated millions of readers, both in print and in film. Reading The Last Unicorn reminds me how much I still adore unicorns and the hero’s journey. I also vividly remember this line from the book: “they [unicorns] passed down all the roads long ago, and the red bull ran close behind them and covered their footprints” (p. 58). This line is echoed in the film to illustrate loss.

As an adult, I also love that the romantic subplot of Lady Amalthea and King Haggard’s son, Prince Lir, isn’t the main focus. As Tolkien explained in his essay, On Fairy-Stories, the eucatastrophe, or the moment of the happily ever after, isn’t the prince rescuing the princess. The eucatastrophe occurs in the bleakest moment: that is when hope arrives– in a mysterious and sudden turn of events. If you have an older child or a teenager who enjoys timeless tales or high fantasy, I would highly recommend this book. The film might seem outdated but it is delightful.