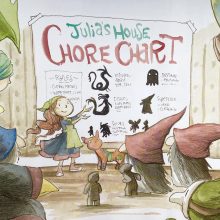 Ben Hatke is best known for his excellent graphic novel series, Mighty Jack and Zita the Spacegirl, but he’s done a number of other works that are absolutely worth reading. Two of these are his picture books, Nobody Likes a Goblin and Julia’s House for Lost Creatures, which feature his signature art style and have amusing, heartfelt, stories. My daughter loved both books – the zany, but warm-hearted, heroics of the goblin and Julia’s plucky compassion.

Watch Ben Hatke read Julia’s House for Lost Creatures, the recently released sequel Julia’s House Moves On, and Nobody Likes a Goblin, followed by a Q&A with Powell’s Books.

Julia’s House for Lost Creatures by Ben Hatke
Library Catalog
OverDrive
In Julia’s House for Lost Creatures, Julia’s house arrives by the sea (yes, it arrives, as it travels on the back of a giant turtle – or is the house just really small? Hmm…). Everything is too quiet and oh-so lonely, so Julia advertises for “lost creatures” to stay with her. They do. In abundance. A riotous mix of wonderfully weird supernatural creatures arrive, including some that I’d never heard of before, such as folletti which it turns out are Italian farm sprites that are adorably small, heavily bearded, people with gigantic noses and prone to mischief. Who knew? With her house full of this menagerie, chaos and cacophony ensue, leading Julia to institute a chore system taking into consideration each creature’s interests, talents or nature.

My daughter and I both love Hatke’s artwork. His whimsical illustrations fully bring to life the cute and fanciful assortment of creatures. The story is amusing, but is also an opportunity to talk about empathy, helping others, acceptance, and working together. 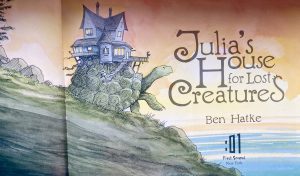 Julia’s House Moves On, the new sequel to Julia’s House for Lost Creatures, is also available in the Library Catalog and OverDrive.

Nobody Likes a Goblin by Ben Hatke
Library Catalog
OverDrive
Nobody Likes a Goblin takes so many traditional fantasy tropes, especially the Dungeons & Dragons inspired idea of an adventuring party’s dungeon raid, and plays with them in irreverent ways. As an adult, I love this book because of its art, its storytelling, but also because I greatly appreciate the way it twists the classic dungeon exploration tale and shows the other side of the adventurers’ story – the consequences of their dungeon delving.

Goblin lives happily in a dungeon with his friend Skeleton, only to have the dungeon’s treasure horde, and his friend, stolen away by a stereotypical band of fantasy adventurers. Setting off on a rescue mission, he finds that other “monsters” have had their friends stolen, and he faces prejudice as a goblin from every human he encounters. However, the Goblin carries onward, despite adversity, and eventually uses the power of friendship and his wit to save the day. Nobody Likes a Goblin is an absolutely adorable book that inverts well-known fantasy tropes and provides an important message about prejudice, perseverance and friendship.