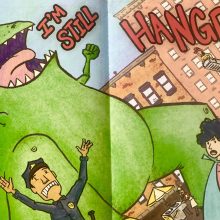 Today’s two Peculiar Picks have one thing in common – hungry monsters on a rampage.

Hangry by Drew Brockington
OverDrive / Library Catalog
A small, Godzilla-like monster arrives in a big city on a train, food guide in hand, looking for a particular highly-rated hot dog restaurant. Only when he arrives, calamity strikes: the restaurant is closed! He’s not just hungry. He’s not just angry. He’s HANGRY! With his hunger and anger at preponderously perilous leves, he grows to enormous size and sets forth on a destructive rampage. Can he be stopped? Children and adults alike can relate to the emotional roller coaster that this poor, hungry little monster faces. 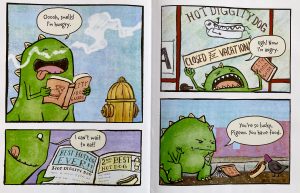 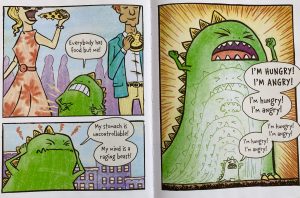 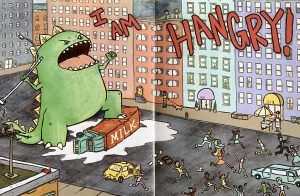 Drew Brockington reads Hangry, then teaches you how to draw the book's monster in this video.

The Super Hungry Dinosaur by Martin Waddell, illustrated by Leonie Lord
Library Catalog
Billy and his dog are playing happily in their backyard when CRASH! A super hungry dinosaur arrives threatening to eat Billy, his dog and his mom and dad. A madcap rampage ensues until Billy finally has enough. Can they come up with a better solution?

BONUS READ!
Since its sequel will be in the next Peculiar Picks, and it’s “on theme” for this one, I’m going to also recommend Oh No! (Or How My Science Project Destroyed the World) by Mac Barnett, illustrated by Dan Santat. Library Catalog

This hilarious picture book pairs two of my favorite creators to tell an action-packed story of a genius young girl who creates a giant robot, which, well… the title kind of explains. Much chaotic robotic rampage and giant frog battling ensues. 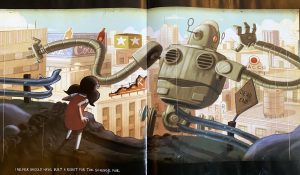 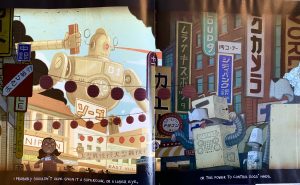