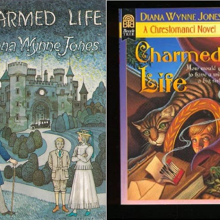 Reads Revisited is a blog series where Trove and Edge Librarians revisit some of their favorite childhood stories. In today's column, Edge Librarian Erik Carlson revisits book one of the Chrestomanci series, Charmed Life (Catalog) by Diana Wynne Jones.

Did you ever wonder where J.K. Rowling got all of her ideas from? Charmed Life has magical castles, powerful necromancers, bad witches and wizards, and an orphaned boy who has no idea that he has magical powers. I have always been a big fantasy fan. Diana Wynne Jones and Ursula K. LeGuin were two of my favorite authors growing up. When I got older I discovered Lord of the Rings. But it all started with Charmed Life. I loved the series and all the different worlds Cat visited.

Eric Chant, aka Cat, is a shy young boy. Unlike his sister, Gwendolen, who is full of confidence, and very outspoken. His sister is also a witch. Cat lives in a world of magic, but being a magician isn’t all that prosperous, except for Chrestomanci. Cat and Gwendolen are also orphans after their parents were killed in a boating accident. They live with their neighbor, Mrs. Sharp, who is not a very talented witch herself. Gwendolen is set up with magic lessons and excels, while Cat tries to keep himself busy. One day, Gwendolen gets the attention of Chrestomanci, the most powerful necromancer in the world, who invites them both to live with him in his Castle. Gwendolen believes this is her chance to become a great and powerful witch. However, when they arrive at the castle, Gwendolen learns that Chrestomanci has no desire to teach her magic at all. Gwendolen takes this as an opportunity to show Chrestomanci how powerful she is, and starts playing pranks with her magic. To her consternation, Chrestomanci doesn’t pay her any attention. Her pranks get worse and worse until one day she leaves. Not the castle, the dimension! In her place, an innocent girl named Janet takes her place.

Janet looks exactly like Gwendolen because they are doubles, the same person from different universes. Janet, unlike Gwendolen, is very nice, but completely shocked over magic because her world has no magic. Eric tries to hide this from Chrestomanci fearing that he would be in trouble. To make matters worse, the two of them are faced with having to deal with the consequences of Gwendolen’s horrible doings. Everyone at the castle hates her, she owes quite a lot of money to a local magic dealer, a young wizard wants to turn Cat into a frog, and Cat is expected to perform magic.

Cat and Janet try to figure out how to get out of all of these predicaments. With no other options, they decide they must leave this dimension like Gwendolen. But this proves much more difficult than they thought without any magical abilities.

This is a timeless tale for fans of fantasy. The usual themes of children keeping secrets from adults, and adults keeping secrets from the children lead to major communication problems. All of these problems could have been easily rectified had people been honest. The book did not capture the same awe that it did when I was younger, but it is still a fun read.