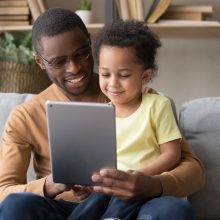 The Trove is excited to announce a new “bite-sized” early literacy video series called Tiny Tales. Trove Librarians will be recording and sharing short stories, songs, rhymes and more. Take a quick early literacy break, or watch a few in a row for a longer storytime!

New videos will be released each Tuesday and Thursday on YouTube and the Library’s social media starting next week, but you can view the first two which are available now!

Tiny Tales are made possible with support from the White Plains Library Foundation.