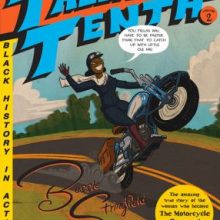 The graphic novel section in the Trove is one of our most loved collections. Read on for some recommendations of great diverse graphic novels and be on the lookout for a new kids comic book discussion club that we’ll be starting this summer!

Class Act by Jerry Craft
For children in grades 4-8.
Library Collection: Print
OverDrive: eBook
This is the sequel to New Kid, which won the Newbery Medal last year! In Class Act, Craft brings back his clever humor and perceptive way of making the reader really think about topics related to race. The first book follows Jordan Banks as he navigates being a new kid at the prestigious Riverdale Academy Day School. He becomes friends with another new student named Drew Ellis. This second book in the series focuses more on Drew’s journey as both boys traverse eighth grade. Drew finds himself struggling to feel at home amongst the many privileged students he attends school with. He also grapples with trying to be himself and participating in hobbies that he enjoys. The intended audience for both of these books is definitely kids but I really think that everyone would benefit from reading them. Class Act is so comical and just really smart. There were a few pages in it that I found myself coming back to because I just got what Craft was saying in them. I can’t wait to hear what the kids think about this tale! Our Project LIT Kids Book Discussion group will be meeting on Wednesday, March 10th at 4:30 p.m. to discuss and play trivia about this story. We hope you’ll join us! Please use this link to find out more information and to register.

Tales of the Talented Tenth Vol. 2: Bessie Stringfield by Joel Christian Gill
For children in grades 4-7.
Library Collection: Print
Hoopla: eBook
OverDrive: eBook
“The second volume of Gill’s history series about little-known heroes of black history has its occasional hammy moments. But these are quibbles only; this quick-paced biography of Bessie Stringfield, the so-called ‘Motorcycle Queen of Miami,' is a pocketful of cheerful, hard-fought optimism. Abandoned by her father as a child and raised by nuns, Stringfield became obsessed with motorcycles at an early age. Bucking the odds against a black woman, she crisscrossed the country eight times in the pre-WWI years, just for the adventure. Stringfield, narrating the story from old age, describes everything as a gas, even outrunning the KKK. Later on, she turns to circus stunt work, billed as the ‘Negro Motorcycle Queen,' and joins the army during WWII as a courier.” –Publishers Weekly

Green Lantern: Legacy by Minh Lê and illustrated by Andie Tong
For children in grades 4-6.
Library Collection: Print
Hoopla: eBook
OverDrive: eBook
“Tai Pham is at a crossroads, torn between the guidance of his late paternal grandmother, or Bà Noi, whose welcoming presence held the neighborhood together, and tech mogul Xander Griffin, who wants to rebuild Coast City without regard for those already there. Tai learns that his grandmother was a member of the Green Lantern Corps, an intergalactic peacekeeping force. He inherits her magical lantern and ring and, just as she did, takes an oath to fight evil, but can he protect his family and his community? Xenophobes vandalize his family’s store, telling the Phams, refugees from the war in Vietnam, to ‘go home.' And Xander’s ambitious vision may irrevocably alter Coast City.” –School Library Journal