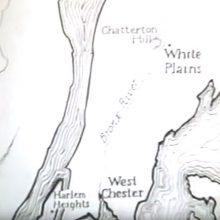 In anticipation of our country’s 250th birthday in 2026, we have uploaded “The Battle of White Plains,” the movie, to our YouTube Channel.

The 25-minute black and white film, which re-enacts the battle, was made over two weekends in the fall of 1977 near Silver Lake. It debuted at the White Plains Public Library on June 1, 1978.

According to Joe Ryan, founder and president of the Living History Education Foundation, who played a Continental soldier in the movie, “The film was created on a limited budget with a lot of local volunteer help. It provided valuable experience for those of us who were fortunate to continue in other period films. I utilized the film in my teaching seventh grade local history before ‘The Other Side of Victory’ and ‘Private Yankee Doodle’ were available.

Ryan continues: “‘The Battle of White Plains’ film style is modeled on a Cannes Film Festival award winner, ‘The Battle of Culloden.’ The end of the film with the death of the black wounded militiaman certainly makes the case for diversity and the grittiness portrayed is telling.”

Thank you to Elaine Massena in the city archives for making us a copy of the DVD; to Jim Kenny of White Plains Cable Access TV for converting it to a digital version; and to Rosalind Schneider of Film & Video Workshop Inc., the copyright holder, for permitting upload to our YouTube channel. Thanks also to Connie Kehoe of Revolutionary Westchester 250, whose initial request for a copy of the film got the ball rolling.