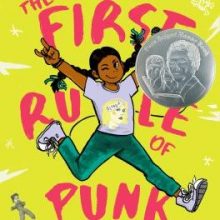 Dive Into Diversity: The Power of Music

Music is powerful and can connect us to others. These days, I find myself listening to old favorite bands and remembering the times when we all could see live shows. Until that happens again, here are some suggestions of books about diverse kids and their passions for music!

The First Rule of Punk by Celia C. Pérez
For children in grades 3-6.
Library Collection: Print
Hoopla: Audio
OverDrive: Audio & eBook
María Luisa O’Neill-Morales prefers to be called Malú. After living in Florida for her entire life, she’s starting seventh grade in Chicago, where her mom has a new job. Malú is not happy about leaving home but especially her dad and Spins & Needles, his record store. She thinks that her mom, who cherishes their Mexican American heritage, is constantly trying to turn Malú into a perfect señorita. But Malú considers herself a punk – she loves loud music, skateboarding, and making zines. She’s on a quest to find folks that are her own people. After seeing a flyer for the Fall Fiesta at her school, Malú decides to form a band with new friends Benny, Ellie, and Joe. She also deals with bullying from classmate Selena who calls Malú a coconut – brown on the outside but white on the inside. Throughout the story, Malú discovers more about her Mexican roots as she works to figure out what exactly being a punk means. She figures out that making your own rules is her definition of what the first rule of punk is. Our Project LIT Kids Book Discussion group will be meeting on Wednesday, April 14th at 4:30 p.m. to discuss and play trivia about this book. We hope you’ll join us! Please use this link to find out more information and to register.

Better Nate Than Ever by Tim Federle
For children in grades 4-6.
Library Collection: Print
Hoopla: Audio
OverDrive: Audio & eBook
“Jankburg, Penn., has always been too small-town for 13-year-old Nate Foster’s Broadway-sized dreams. Jocks and God rule in the Foster house, which is good news for Anthony, Nate’s older brother, and bad news for a boy with a soft spot for jazz hands and show tunes. Thankfully, Nate’s best friend, Libby, shares his love of the Great White Way. When Libby learns of an upcoming audition for a Broadway-musical version of E.T., it’s too good an opportunity to pass up. With Libby as his cover, the two hatch a plan that will have Nate to New York and back with the role of Elliott firmly in hand before anyone even knows he’s gone missing. Alas, things rarely go according to plan. Nate is a quirky and endearing leading man from the start, and anyone who has ever felt out of place will easily identify with him. It’s a joy to watch him fall head over heels for a city that couldn’t care less about him—in the best possible way.” –Kirkus Reviews

Drum Roll, Please by Lisa Jenn Bigelow
For children in grades 5-8.
Library Collection: Print
OverDrive: eBook
“Middle schooler Melly has always followed the lead of her best friend, Olivia. Olivia insisted that they join band in the fifth grade, and three years later, Olivia decides that they should go to rock-and-roll camp. Luckily, Melly loves playing music (‘It felt like the drums were pumping energy into me,' she says), but the timing for camp couldn’t be worse. The day before she leaves, she learns that her parents are divorcing. Carrying a bundle of anger and confusion along with her drumsticks, Melly arrives at Camp Rockaway unprepared for the challenges she will face, including an intimidating audition and working with unlike-minded musicians. In a story about growing pains, turning points, and self-discovery, Bigelow (Starting from Here) shows an equally clear understanding of the dynamics of camp life and young adolescent emotions.” –Publishers Weekly