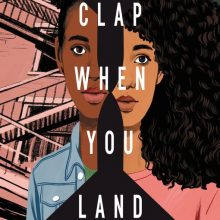 Dive into Diversity: YA Books in Verse

In 2021, my Dive into Diversity posts about young adult books will focus on a different genre each month. I’ll highlight books with characters that represent a range of experiences and identities. I’ll also feature #ownvoices authors, or authors who share an aspect of their characters’ identity, as much as possible. This month, in preparation for Poetry Month, I’m highlighting novels (and one memoir) in verse. I love reading books written in this format. In addition to being quick reads, they’re often beautifully written and convey emotion in a unique way. 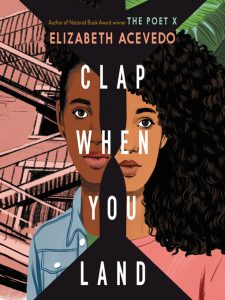 Clap When You Land by Elizabeth Acevedo
Grades 10 and up
OverDrive; Library Catalog
I chose to read this book this month because it is the featured title for our April Project LIT Book Club for Teens. Join us to discuss this awesome book on Friday, April 9th at 6:30 p.m.
Clap When You Land is about two girls whose father is aboard Flight AA587 from New York to Santo Domingo, Dominican Republic. Camino lives in the Dominican Republic with her Tía and sees her father only during his annual summer visit. Yahaira lives with both parents in New York City. Neither girl knows that she has a sister… until their father's death reveals the secret that he had tried to hide. Camino and Yahaira struggle to reconcile their father's secrets with their experiences of him in life, and their grief over his death. As the girls get to know one another, they begin to be able to envision a future without their father. Acevedo is known for her spectacular novels in verse, like The Poet X (OverDrive/Hoopla/Library Catalog) and With the Fire on High (OverDrive/Hoopla/Library Catalog), and Clap When You Land is another must-read.

Every Body Looking by Candice Iloh
Grades 7 and up
OverDrive; Library Catalog
“High school’s finally over, and Ada’s off to college at an HBCU 697 miles away from her home on Chicago’s North Side. No longer is she bound by her father’s incessant prayers, his imposition of a God she is not even entirely sure she will continue to follow. Nor is Ada subject to the delicate handling of her temperamental mother or managing her far too predictable outbursts. But with thousands of miles between them, and the freedom to finally be herself, Ada reckons with the weight of her life’s experiences and long-suppressed desires as college life messily unfolds. Her magic, though, is found in dance, where her body is free to say all of the things that her mouth hasn’t yet had the boldness to.” –Booklist 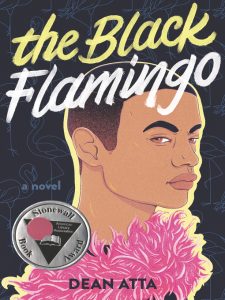 The Black Flamingo by Dean Atta
Grades 9 and up
OverDrive; Library Catalog
“Courage and fierceness abound in this lyrical coming-of-age story about a young boy finding his way. In his latest work, Atta flawlessly captures the pain, rage, and resilience of a boy growing to manhood while feeling like an outsider in his own life. Michael, a British boy of Greek Cypriot and Jamaican descent, feels caught between worlds: black and white, masculine and feminine, straight and gay. His story, told in verse form, allows readers to watch him grow and to experience each of the triumphs and tragedies that help him define himself on his own terms.” –Kirkus Reviews 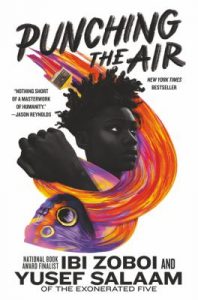 Punching the Air by Ibi Zoboi and Yusef Salaam
Grades 8 and up
OverDrive; Library Catalog
“Zoboi (Pride) and Salaam (one of the Exonerated Five) together craft a powerful indictment of institutional racism and mass incarceration through the imagined experience of Amal, a Black, Muslim 16-year-old facing imprisonment. Amal, a gifted artist and poet attending a prestigious fine arts high school, has his life turned upside down when a nighttime park confrontation leaves a white kid from the other side ‘of that invisible line/ we weren’t supposed to cross’ in a coma, and Amal and his four friends on the hook for assault and battery they did not commit. Using free verse, Zoboi and Salaam experiment with style, structure, and repetition to portray ‘old soul’ Amal’s struggle to hold on to his humanity through the chaotic, often dehumanizing experience of juvenile incarceration.” –Publisher’s Weekly 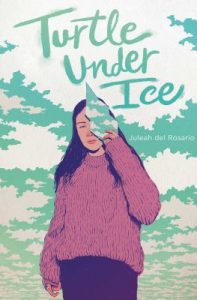 Turtle Under Ice by Juleah del Rosario
Grades 7 and up
OverDrive; Library Catalog
“In the six years since their mother died, Filipino American sisters Rowena and Ariana have dealt with their grief by coasting on autopilot, going through the motions necessary to keep up appearances. They even have had moments of happiness, like anticipating the arrival of a new baby sister by their likable stepmother, Maribel. But when Maribel miscarries 12 weeks into her pregnancy, the sisters' worlds come crashing down. No longer able to fake being all right, they each react in different ways. Ariana sets out in a snowstorm without telling anybody, determined to display artwork inspired by her mother at a downtown art exhibit. Rowena turns inward, rebuffing the attempts of her best friend to help her and focusing on soccer instead. Del Rosario aptly conveys each sister's depth of emotion and pain in beautifully written free verse that alternates viewpoints and helps fill the gaps in the narrative.” –School Library Journal 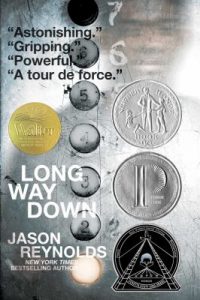 Long Way Down by Jason Reynolds
Grades 8 and up and up
OverDrive; Library Catalog
“After 15-year-old Will sees his older brother, Shawn, gunned down on the streets, he sets out to do the expected: the rules dictate no crying, no snitching, and revenge. Though the African-American teen has never held one, Will leaves his apartment with his brother's gun tucked in his waistband. As he travels down on the elevator, the door opens on certain floors, and Will is confronted with a different figure from his past, each a victim of gun violence, each important in his life. They also force Will to face the questions he has about his plan. As each ‘ghost’ speaks, Will realizes how much of his own story has been unknown to him and how intricately woven they are. Told in free-verse poems, this is a raw, powerful, and emotional depiction of urban violence.” –Kirkus Reviews 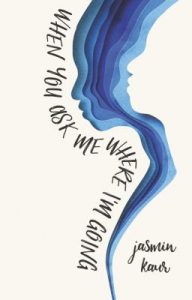 When You Ask Me Where I’m Going by Jasmin Kaur
Grades 9 and up
OverDrive
“Nestled among heartfelt poetry, prose, and illustrations in this collection are topics pertinent to present times. Feminism, sexual assault, objectification, immigration, as well as corruption and the effects of European colonization in Punjab, are merely a handful of issues examined. Wholly, Kaur's debut collection explores what it means to be a young woman in a world that not only fails to hear her but that often refuses to see her. The novel begins with poems that are more than pretty words; they carry weight and breathe fire.” –Booklist 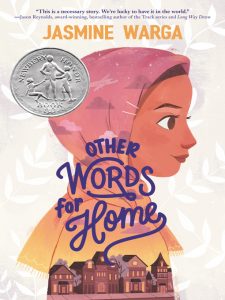 Other Words for Home by Jasmine Warga
Grades 4 and up
OverDrive; Hoopla; Library Catalog
“Living in a tourist town on the Syrian coastline, Jude experiences the inequalities in her society firsthand. With the unfolding of the Arab Spring, her older brother, Issa, wants to join protests against the Syrian regime. The parents are in favor of staying out of it, but with news of a new baby and nearby towns turning into battlegrounds, Jude and her mother travel to join her uncle, a medical doctor, and his family in the American Midwest. Her free-verse narration cuts straight to the bone: ‘Back home, / food was / rice / lamb / fish / hummus / pita bread / olives / feta cheese / za'atar with olive oil. / Here, / that food is / Middle Eastern Food. / Baguettes are French food. / Spaghetti is Italian food. / Pizza is both American and Italian, / depending on which restaurant you go to.’ Jude, who has always loved American movies, shares her observations—often with humor—as she soaks everything in and learns this new culture.” –Kirkus Reviews 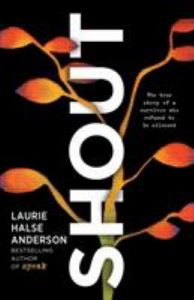 Shout by Laurie Halse Anderson
Grades 8 and up; Nonfiction
OverDrive; Library Catalog
“Novelist Anderson has terrified adults and earned nods of recognition from teenagers with her unflinching portrayals of sexual assault, eating disorders, and self-harm. With this searing memoir in verse, she revisits the trauma that sliced through her and her family: the father shattered by memories of serving in World War II, the mother worn down by picking up the pieces, and the rape that buried teenage Laurie in a deep depression and laid the roots for her novel Speak. Anderson's wordplay is sophisticated, disturbing imagery underscoring her pain—a girl without eyelids, a girl submerged in cement. She's as witheringly sarcastic as her protagonists, yet she possesses hard-won wisdom and a mixture of honesty and tenderness.” –School Library Journal 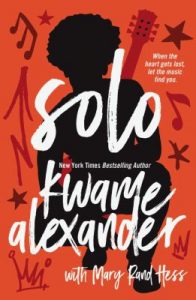 Solo by Kwame Alexander
Grades 7 and up
OverDrive; Library Catalog
“On the verge of adulthood, Blade Morrison wants to leave his father's bad-boy reputation for drug-and-alcohol-induced antics and his sister's edgy lifestyle behind. The death of his mother 10 years ago left them all without an anchor. Named for the black superhero, Blade shares his family's connection to music but resents the paparazzi that prevent him from having an open relationship with the girl that he loves. However, there is one secret even Blade is unaware of, and when his sister reveals the truth of his heritage during a bitter fight, Blade is stunned. When he finally gains some measure of equilibrium, he decides to investigate, embarking on a search that will lead him to a small, remote village in Ghana.” –Kirkus Reviews