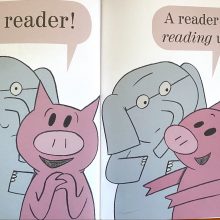 I really enjoy meta-fictional books for younger readers. By this I mean books that are “aware” of their book-ness, or that actively reinforce their book-ness to the reader. For example, characters may interact with the physicality of the book, provide commentary on themselves and their world within the book, or break the fourth wall and address the reader. I’ve seen more and more books that employ these techniques being published over the past few years. In some cases it’s a big flop, but when done well, it can be such a fun and fantastic storytelling technique. I’ve noticed on more than one occasion that my daughter enjoys books like this, especially when they use meta-fiction for absurd or hilarious effect. She really gets into it.

Here are a few of our recent favorites.

The Bear Who Wasn’t There by LeUyen Pham
eBook / Library Catalog
My daughter and I laughed, a lot, while reading this book. From the very front cover, where the snarky duck says “Spoiler alert: The bear never shows up,” to playing with the pages themselves throughout and at one point even bringing creator LeUyen Pham directly into the book, all the way through to the end pages where a sneaky surprise lies in wait this book does not relent with its over-the-top self-aware humor. Highly recommended, and highly underrated, hilarity from Pham, who is also known for illustrating the Vampirina and Princess in Black series, among many other works. 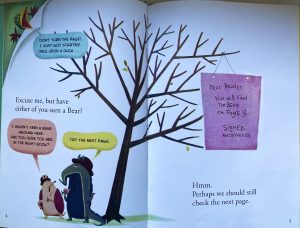 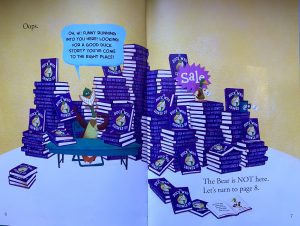 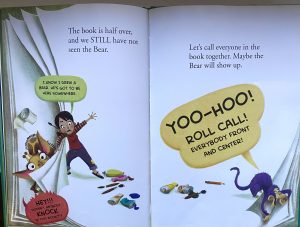 This is a Taco!
eBook / Library Catalog
This is a Whoopsie!
eBook / Library Catalog
by Andrew Cangelose, illustrated by Josh Shipley
These two delightful books, like The Bear Who Wasn’t There, make it clear from the front cover that they are meta-fiction and playing with the book as a construct. On the first title’s cover, the taco munching squirrel (“name is Taco, ‘cause my favorite food is tacos!”) has a red pen and has crossed out the word squirrel and replaced it with the word “taco” whereas on the second cover the klutzy moose, Whoopsie, sits amidst the fallen letters of the word “moose” while a word balloon replaces it with his name. The animals actions are also in many ways dictated by what the narrator says, to comic effect. For example, the narrator provides the informative fact that “Squirrels can rotate their ankles completely backward” which results in poor Taco’s feet spinning wildly. The books are full of laugh-out-loud bizarre meta-fictional moments like this. 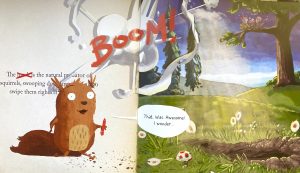 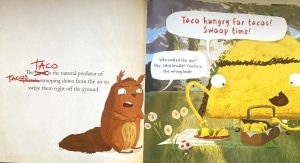 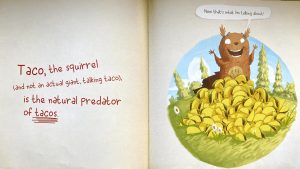 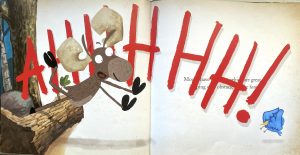 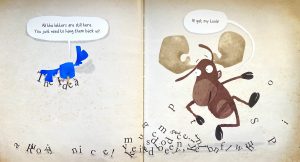 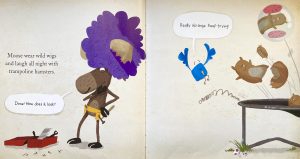 Note: It took me quite some time to figure out how to read these books aloud, with the narration, the repeated editing of the text by the characters, as well as the character’s actual speaking parts — to each other and to the narrator and reader. What I found work, and I recommend you try it because these books are so worth it, is to read the narrator in a dry nature documentary voice, really animate the character’s speaking voices to contrast, and add in plenty of sound effects and even hand motions on the pages to emphasize the edits. Go ahead, go get the books right now and try it out. I’ll still be here.

Snappsy the Alligator Did Not Ask to Be in This Book!
eBook / Library Catalog
Snappsy the Alligator and His Best Friend Forever
eBook / Library Catalog
by Julie Falatko, illustrated by Tim Miller
These were read many, many times recently. Very funny books, in which an alligator, Snappsy, becomes increasingly irritated with the narrator of his story, and then, the narrator, who turns out to be a chicken, inserts himself into Snappsy’s life and story. So many meta-shenanigans! I think one of my favorite parts is that in the second book, Bert (you finally find out the chicken’s name in the second book) continues to narrate Snappsy’s life, even though he is right there following him around, inside the book. Oh, and Bert carries around copies of the book that he is currently within and part of. So meta. 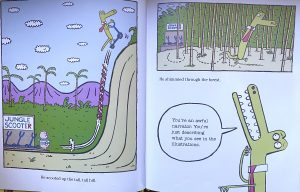 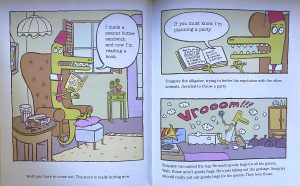 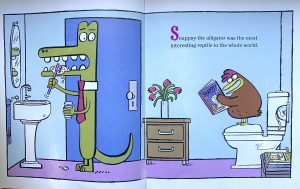 See the Cat: Three Stories About a Dog by David LaRochelle, illustrated by Mike Wohnoutka
Library Catalog
This recent award-winner really got my daughter laughing. Plus, along with the Elephant & Piggie series (below!), is one of the books she is regularly flying through reading on her own. From the very cover of the book, you know that it’s a meta-fictional tale, as the dog is looking up at the title See the Cat and saying “Wait a minute…” The three stories are quite humorous and employ some of the same techniques as This is a Taco! and This is a Whoopsie! where the dog is able to interact with the physical book itself, changing words to its benefit. In addition, the dog speaks directly to the narrator in order to change the book’s final outcome. Funny and interesting, with simple text – great read. 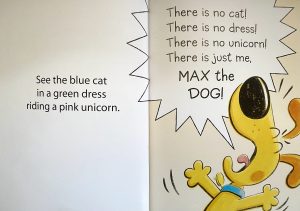 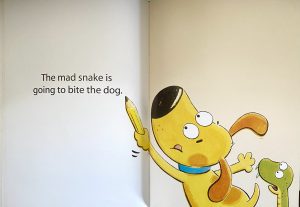 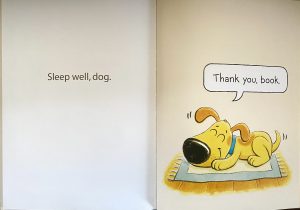 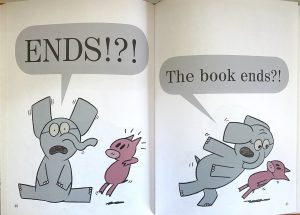 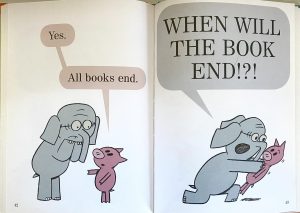 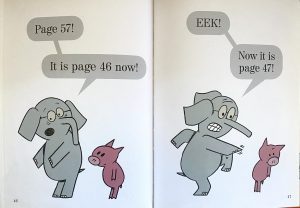 Whew. I think Harold & Hog Pretend for Real! could be the plot of Christopher Nolan’s next film. 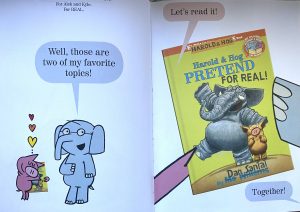 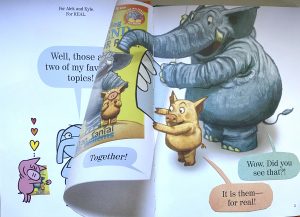 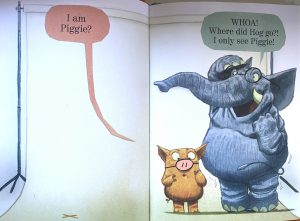 Do you have any favorite meta-fictional books for younger readers? Leave them in the comments below!