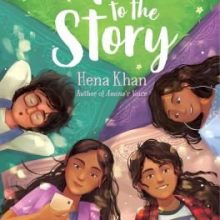 Classic literature can be great but their protagonists are more often than not usually white. I’m really impressed with the writers of the following diverse classic reimagining books and excited to read the ones I haven’t yet since they all sound really amazing!

A Wish in the Dark by Christina Soontornvat
For children in grades 4 and up.
Library Collection: Print
OverDrive: eBook

Just because something is a law doesn’t necessarily mean it is fair or right. Pong has learned this the hard way since he’s spent his whole life in Namwon prison for a crime he didn’t commit. He was born there and law dictates that those in that circumstance will not be allowed to leave until they turn thirteen. Although Pong has his best friend Somkit, he dreams of the day when he can leave the prison behind and live beneath the bright lights of Chattana. After the Great Fire, the Governor brought peace and order to their land with the magical light he creates. When Pong gets the chance to escape the prison, he jumps at it even though he’s only nine. Meanwhile, Nok, the prison warden’s daughter, has been taught to follow rules and that those who break them must be punished no matter the situation. Many years after Pong’s escape, she recognizes him and is determined to bring him to justice. This Thai-inspired reimagining of Les Misérables is fast-paced and had me rooting for those involved with trying to demand change to the Governor’s unfair laws. Our Project LIT Kids Book Discussion group will be meeting on Wednesday, May 12th at 4:30 p.m. to discuss as well as play trivia about this book and we hope you’ll join us! Please use this link to find out more information and to register.

“As the curtain raises on this reimagining of A Midsummer Night’s Dream, Indian-American Mimi, 11, is reading her favorite cookbook when she hears a song drifting from the woods “like an irresistible aroma.” Debut author LaRocca liberally uses food metaphors to underscore Mimi’s passion for baking, which she shared with her sorely missed best friend who moved away. Hints of Shakespeare surface as Mimi’s brother Henry spouts lines from the school production, in which he plays Puck, whose character traits are reflected in Vik, the mysterious pipe-playing boy who befriends Mimi in the forest. While she experiments with recipes in hopes of winning a celebrity-judged Midsummer’s Eve baking contest and proving herself to her high-achieving parents and siblings, Mimi’s family and neighbors start talking and acting out in puzzling, inexplicable ways after sampling her herb- and flower-based confections.” –Publishers Weekly

More to the Story by Hena Khan
For children in grades 4-6.
Library Collection: Print

“Four sisters in a Muslim, Pakistani American family star in Khan’s (Amina’s Voice, 2017) 21st-century update to a beloved classic of American literature. The narrator is Jam (short for Jameela), a seventh grader bent on becoming a journalist. Her family newsletter, Mirza Memos, is all hers, but on the school newspaper she fights to make her voice heard about publishing important subjects. Her older sister, Maryam, is in high school. Maryam’s beauty is what people notice, but she is also studious, responsible, and caring. The youngest, Aleeza, brings out the worst of Jam’s temper, while gentle Bisma brings out Jam’s protective, loving instincts. Exit Baba (their father) for an international work contract; enter Ali, a cute British Pakistani boy who befriends all the girls, but especially Jam. Add money problems and the sudden discovery of a serious illness for Bisma, and you have a carbon copy of Little Women that feels comfortingly familiar yet also entirely new, like an old friend given a makeover.” –Kirkus Reviews