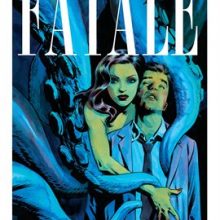 Grown Up Comic Series on hoopla

I’ve enjoyed comics for a long time, but I admittedly do not like the process of waiting for new issues, new collections, and the length of time to find out what happens!?!?! These fantastic series, most definitely intended for grown-ups, are all available currently on hoopla and completely finished – just waiting for you to binge read them!

Fatale by Ed Brubaker and Sean Phillips
A lushly illustrated pulp noir thriller mashed up with Lovecraftian horror? It’s as amazing as it sounds, from one of the greatest writers in comics today. I have long wanted the cover of Volume 1: Death Chases Me as a poster-sized print. 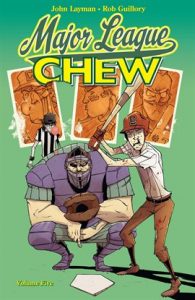 Chew by John Layman and Rob Guillory
What a trip this series is. A bizarre concept and with even more bizarre “superpowers,” a detective procedural story, awesome illustrations, zany villains, and absolutely bonkers hilarity, I loved the experience of reading Chew. The title refers to the special ability of the main character, Tony Chu, who through eating/tasting things can get psychic impressions from them. His is only the first of many weird powers people have in the world of Chew, which is also filled with aliens, ninjas, spies, robots and more. One thing I especially loved about Chew is poring over the images. Guillory fills every page with Easter eggs, hilarious bits… each ultra-colorful image tells several mini-stories of their own in the background to the main story. 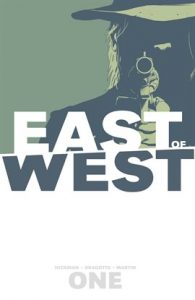 East of West by Jonathan Hickman and Nick Dragotta
I will admit, I have not finished this series. I have long meant to, having read, and been blown away by, the first four volumes, but you know how things go… and then, while looking at titles for this blog post, found out East of West completed with Volume 10! So, I am totally diving back into this epic Sci-Fi Western – a tale of a post-apocalyptic world, where Death roams seeking his lost love, various political factions vie for power, and bizarre technology influences every aspect of life. East of West is visually striking, violent and filled with impressive world-building and great storytelling. I can’t wait to read what I’ve missed out on! 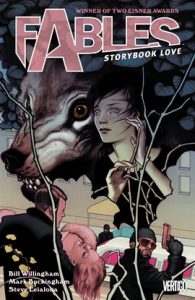 Fables by Bill Willingham, Mark Buckingham and others
Fables is simply wonderful. Willingham situates fairy tale characters in our world, creates a soap opera, a mystery, a romance, a comedy, an adventure, and more, while establishing a grand overarching story about villainy, politics and war. The artwork is stunning. The story is brilliant, heartbreaking, funny, and manages to incorporate so many fascinating characters, plotlines and twists. It can be daunting, with 150 issues spread over many volumes, but this is one epic and amazing story. I so very highly recommend Fables! 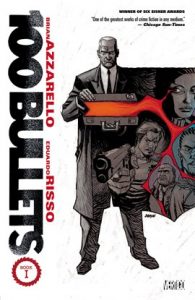 100 Bullets by Brian Azzarello and Eduardo Risso
A violent, gritty, and action-packed mystery that ruminates on humanity, revenge and how people can be corrupted. A mysterious individual offers people the chance to get revenge on those who have wronged them, without any trace. The individual episodic stories of these characters weave in and out with each other, forming one overall narrative leading to more mysteries: who is offering this revenge, how are they making it possible, and more importantly, why? 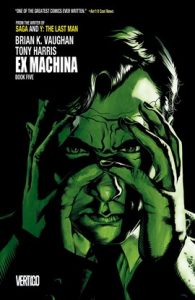 Ex Machina by Brian K. Vaughan and Tony Harris
I’ve read all of Ex Machina twice. This heady, politically charged superhero story set in NYC was revelatory to me when I first read through it in the early 2010s, filled with post-9/11 relevancy. When I read it again recently, I was struck by how contemporary it still feels. Vaughan is a brilliant storyteller. He’s well-known for Y: the Last Man (also complete and available on Hoopla) and the absolutely masterpiece ongoing series Saga with Fiona Staples (which I cannot wait for the rest of!), but I feel like Ex Machina needs to get its due. Go check it out. 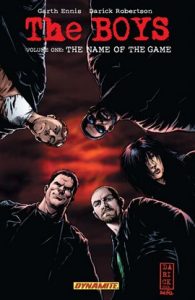 The Boys by Garth Ennis and Darick Robertson
The hit Amazon show started here. This is a wildly violent and adult series in which Ennis deconstructs the superhero genre and questions the power and motivations that those superheroes have, as well as the idea of holding those in power accountable for their actions.