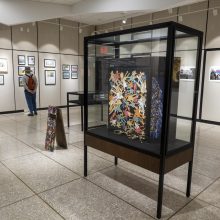 This new exhibit will be on display in the Library's newly renovated Museum Gallery on the second floor starting Tuesday, June 1st, through Friday, September 3rd. The gallery is accessible during normal Library hours. 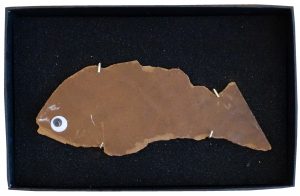 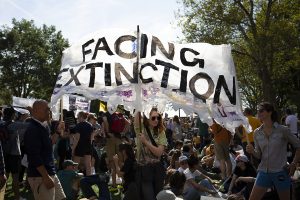 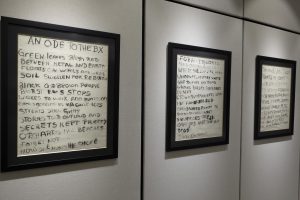 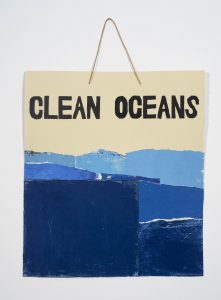 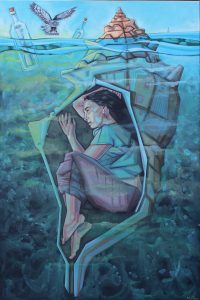 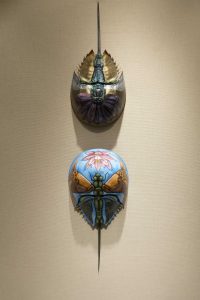 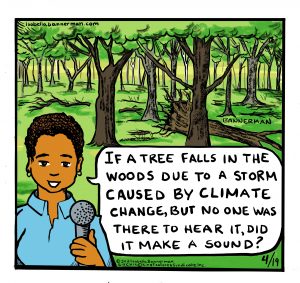 Artwork from left to right:

Ed Young, Fish, 2020, Multimedia on Masonite, 5”x8”x3”
Fish symbolizes “Sparingness” in which we celebrate the time of our gift of fellowship, harvest, creativity and spiritual renewal. A carp in Chinese mythology fights its way upstream to leap the gate to transform into a dragon. – Ed Young

Gina Randazzo, Climate Strike With Greta Thunberg, Battery Park NYC 9/20/19 (3), 2019, Pigment Print, 17”x 22”
“We will not let you get away with this. Right here, right now is where we draw the line. The world is waking up. And change is coming, whether you like it or not.”
-Climate activist Greta Thunberg, 16 years old, speaking at the United Nation’s Climate Action Summit in New York City in September 2019

With a School Strike For Climate sign Greta Thunberg began protesting in front of the Swedish Parliament in 2018. By 2019 there were coordinated protests in multiple cities attended by more than a million students. These images document Youth Climate Strike protests in New York. The photographs share a connection with imagery of the long history of street protests in the United States but are new in format, language and focus. The pigment prints highlight the strong colors that are a visual representation of the demand to be heard. – Gina Randazzo

An Ode to the Bronx in Palo Santo is a meditation on local memory making and markings using the ashes of burning palo santo as a written visual portal for healing and grounding in between colonized lands and places I call home. Palo santo is an aromatic tree that is endemic to Ecuador and is burned to cleanse spaces of unwanted energies and ward away negative spirits to make room for good spirits and energy. This palo santo writing series honors my roots as part of the Ecuadorian indigenous diaspora and my birthplace of The Bronx aka the unceded land of The Lenni Lenape Tribe. The poem becomes visual language and text through the ashes of the palo santo. Each word marks an intention to carve out memory and honor the legacy from which my roots are shaped and nourished by in times of uprising and rebellion.

Diane Brawarsky, Bag Series: Oceans, 2020, Collage, 23”x14”
Reusable shopping bags often have a message and this became my vehicle for visualizing my concerns about our climate crisis. As I got further along, read more and listened more, I chose to focus on the shocking contrast between our privileged society and our more vulnerable populations. This is climate injustice. It is my hope that my images will bring consciousness to affect change.

Carlos calls his style Pop Geometric. His paintings fuse elements of cubism with realism, using straight lines and perspective to create a geometric and three-dimensional effect, while subtly deforming the images. Intense colors of acrylic are applied in layers like silkscreen, creating clean and precise divisions between tones, textured further with oil pastel. His subject matter incorporates surrealism and mysticism to reflect the Afro Cuban life and religions, memories of Cuba, his life in the United States and his own creative perspective on the world around him.

I have been a professional cartoonist since 2000, but my interest in environmentalism goes back to my childhood in Buffalo, NY, where I observed the pollution of Lake Erie from the steel mills. The tools of humor and satire bring a lighthearted approach to a difficult topic, to disarm the reader, and provide a new perspective. Most of the work was created for a daily comic strip called “Six Chix.” It is published by King Features, drawn by six female cartoonists and can be found at comicskingdom.com and @isabellabannerman on Instagram every Monday. Other pieces were created for the organizations Sustainable Westchester and The Union of Concerned Scientists.