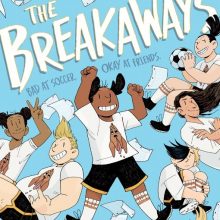 Did you know that we have a section in the Trove with tons of suggestions for children and tweens based on what grade they’re in? Starting with Pre-K and going up to grade 6, it’s a really handy resource and many of the titles are inclusive, diverse and multicultural! Here are a few recommendations of books from that section that you may want to devour this summer! 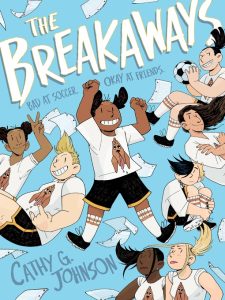 The Breakaways by Cathy G. Johnson
For children in grades 4-8.
Library Collection: Print
OverDrive: eBook
In this quick and fun graphic novel, popular girl Amanda convinces fifth grader Faith to join the Bloodhounds. While Faith thinks she’ll be playing on the same team as Amanda, it turns out that she’ll be on the girls’ soccer C team, which contains the players with a limited amount of skill. They’re a team of underdogs with not a ton of interest in actually winning games. This story highlights the characters themselves and shows their lives at home, what they’re interested in, and how friendships develop between the players. A few of the teammates have known each other for a while and others gain new companions as the book progresses. Some drama arises between the players and other students that they know. But the team members are all very supportive of each other as well as open and understanding to learning new things about their new friends. Readers also get glimpses of Faith’s daydreams as she imagines an adventure with a royal messenger as he travels between various kingdoms. These illusions encourage Faith to come to the decision to try to unite all of her teammates. This is a really character driven story and shows a team coming together even though it turns out that they aren’t that into playing soccer at all! 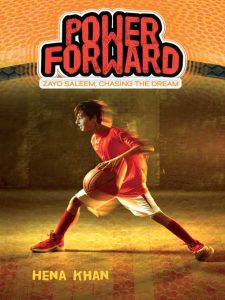 Power Forward by Hena Khan
For children in grades 3-6.
Library Collection: Print
OverDrive: eBook
“Fourth-grader Zayd has the passion to make the gold basketball team, but his latest obstacle might make him miss the upcoming tryouts. Zayd has one goal: to improve his basketball skills in time for the tryouts. His small size is not on his side, but his Pakistani-American family is loving and supportive (with the exception of his annoying older sister), and his best friend is encouraging. Zayd also plays violin in the school orchestra, a commitment of time and money that his parents do not take lightly. When Zayd decides that his rehearsal time would be better spent practicing basketball, two weeks of sneaking about are followed by a harsh punishment when he is discovered: He is not allowed to play, watch, read, or talk about basketball for two weeks—which means no tryouts at all. Will Zayd find a way to achieve his dream? Zayd is a sympathetic protagonist, and his story is told with humor and artfully filled with interesting cultural matter, from his grandmother’s television shows and his grandfather’s games to the family-powered courtship process his uncle goes through. The family dynamics are refreshingly portrayed: Money is a concern; parents are firm though loving; and each generation has a unique perspective. The moral of staying true to yourself and honest with others is easily digested. Readers will cheer for Zayd and look forward to the next volume.” –Kirkus Reviews 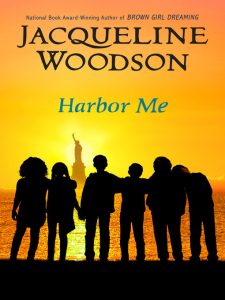 Harbor Me by Jacqueline Woodson
For children in grades 4-6.
Library Collection: Print
OverDrive: Audio & eBook
“Woodson (Brown Girl Dreaming) celebrates all that is essential and good for humanity—compassion, understanding, security, and freedom—in this touching novel about six children with special needs. Sixth-grader Haley and her best friend, Holly, don’t know much about their four male classmates when they are placed in a self-contained classroom. They soon discover the things that they do and do not have in common when, on Friday afternoons, their teacher takes them to ARTT (a room to talk). Here, without adult supervision, the class can have conversations about anything. Usually the students use the time to unburden themselves of problems ranging from a parent’s deportation to bullying in the schoolyard. Haley is the last to spill her secrets, about her mother’s death and why her father is in prison, and afterwards she is rewarded with a feeling of lightness, “like so many bricks had been lifted off me,” she says. Woodson’s skills as poet and master storyteller shine brightly here as she economically uses language to express emotion and delve into the hearts of her characters. Showing how America’s political and social issues affect children on a daily basis, this novel will leave an indelible mark on readers’ minds.” –Publishers Weekly