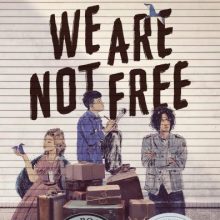 Dive into Diversity: YA Historical Fiction

In 2021, my Dive into Diversity posts about young adult books will focus on a different genre each month. I’ll highlight books with characters that represent a range of experiences and identities. I’ll also feature books written by authors who share an aspect of their characters’ identity, as much as possible. This month, with the Fourth of July approaching, I'm highlighting some great YA books in the historical fiction genre. Not all of them are set in the United States, but many of the titles below examine events in U. S. history from a perspective that's different from the dominant historical narrative that we usually hear.

This month, I was inspired by my son's recent obsession with the Titanic and picked up Stacey Lee's Luck of the Titanic. The book follows twins Valora and James Luck, the acrobatically-talented children of a Chinese father and a British mother, as they travel on board the Titanic. Valora has a plan to impress fellow passenger Albert Ankeny Stewart, whose circus connections may get Valora and James into the United States despite the Chinese Exclusion Act… if James will agree to perform. Getting an audience with Stewart is a high-wire act in itself, and Valora's deft navigation of the obstacles in her path was almost enough to make me forget about the inevitable iceberg lurking just around the corner. Lee weaves in observations about racism throughout, and sheds light on a lesser-known element of the Titanic story: before reading the book, I didn't know that there were eight Chinese passenger aboard Titanic. It's not a surprise that a book about the Titanic is not going to end happily, but despite the tears at the end, this book was well worth the read. You can borrow it in print through our library catalog or digitally through OverDrive.

The Awakening of Malcolm X by Ilyasah Shabazz and Tiffany D. Jackson
Grades 7 and up
Library Catalog / Hoopla / OverDrive
“How did Malcolm Little, the son of a Lansing, MI, Baptist minister, become the renowned Malcolm X? When Malcolm is 20, he is caught up in the robbery of an empty house. He relies on the testimony of his friend Sophia, a white woman, to minimize the amount of trouble he will be in, however, she lies and he is sentenced to eight-to-10 years in prison. The conditions in the prison are beyond wretched. He stews in anger during the first part of his incarceration while his family begins to follow the principles of the Nation of Islam. “Wake up, Malcolm” is a phrase repeated throughout the novel and helps readers identify the pivotal situations forming who becomes known as Malcolm X. During his incarceration, Malcolm reads, learns, and discovers his gift for public speaking and debate. The central momentum of this novel is how Malcolm X was motivated to learn and use his knowledge to influence others.” –School Library Journal

A Sitting in St. James by Rita Williams-Garcia
Grades 9 and up
Library Catalog / OverDrive
“An unblinking view into plantation life in the Deep South. At first glance this epic seems to be focused on the ups and downs of the Guilbert family, slaveholders living in the Louisiana parish of St. James whose legacy is protected by 80-year-old matriarch Madame Sylvie Bernardin de Maret Dacier Guilbert. However, Williams-Garcia doesn't stop in the salons and sitting rooms; she brings readers into the cabins and cookhouses of enslaved people whose perceived invisibility gives them access to ideas and knowledge that empower them in ways that few fiction writers have examined. Sixteen-year-old Thisbe is the personal servant to Madame Guilbert-treated like a pet and beaten with a hairbrush for the smallest alleged slight. Her narrative to liberation is intricately webbed within the story of the Guilberts. Thisbe's silence helps her acquire the language to affirm her humanity to those who would deny it. With a cast of characters whose assorted genealogies feel like an ode to the mixing of peoples and cultures in Louisiana, this story broadens and emboldens interrogations of U.S. chattel slavery.” –Kirkus Reviews

We Are Not Free by Traci Chee
Grades 7 and up
Library Catalog / OverDrive
“Young Japanese Americans tell of life during World War II. In San Francisco's Japantown, a group of teens has grown up together and become like family. But life in America after the 1941 bombing of Pearl Harbor is dangerous for them. They and their families are taken to the Topaz incarceration camp in Utah, where the harsh conditions and injustices they experience turn their worlds upside down. They draw some comfort in being together—however, a government questionnaire causes rifts: Loyalties are questioned, lines are drawn, and anger spills over, threatening to destroy the bonds that once held them together. The teens are forced apart, some enlisting in the 442nd Regimental Combat Team while the No-Nos (those who refuse to serve in the U.S. military and swear allegiance solely to the U.S. government) are relocated to the Tule Lake camp, and others, whose families passed background checks, are allowed to resettle in locations around the country. This is a compelling and transformative story of a tragic period in American history.” –Kirkus Reviews

Saving Savannah by Tonya Bolden
Grades 8 and up
Hoopla
“Savannah Riddle and her parents are known for their status in the upper echelon of African American society in 1919 Washington, DC. But lavish parties and clothes can’t quell the unrest in Savannah’s heart. She used to revel in the comforts of wealth, but the aftershock of WWI and new racial and gender tensions challenge Savannah to find a greater purpose for her life. With help from Lloyd, a working class West Indian man, Savannah learns ideologies of revolution that far surpass DuBois’ ‘talented tenth.'” –Booklist Reviews

The Forest of Stolen Girls by June Hur
Grades 6 and up
Library Catalog
“A historical mystery that takes readers on a breathtaking journey through 1400s Korea. Min Hwani's father, the venerable Detective Min, has been missing for a year and is presumed dead. Desperate for answers and betrothed to be married soon, 18-year-old Hwani flees the peninsula and secretly returns to her hometown on the island of Jeju. Reconnecting with her sister, Maewol, the pair work to mend their relationship as they search for their father and 13 missing girls—the case he was investigating when he vanished. The sisters must discover what has become of the most beautiful girls in the village, and how everything connects to ‘the Forest Incident' in their past. Hur's worldbuilding is majestic, transporting readers to Joseon Korea to unravel a compelling mystery.” –School Library Journal

Poetry of Secrets by Cambria Gordon
Grades 7 and up
Library Catalog / OverDrive
“At 16, Isabel Perez, a Jewish teenager of the 15th century living in Trujillo, Spain, manages more than the books for her family's wine business; she's determined to fall in love with someone her poems only imagine, even if her refusal to marry the town constable kills her and her family—her parents, Abuela, and younger sister Beatriz. The resolution of this tension informs much of the novel, although Abuela, who teaches her granddaughters to read in secret, just as her own grandmother had done, shows that rebellion goes back over many generations. Gordon sets these willful characters against the Spanish Inquisition, and the repression, violence, and torture of Jews, Muslims, and anyone else who opposed the country's Roman Catholic orthodoxy.” –School Library Journal

Last Night at the Telegraph Club by Malinda Lo
Grades 9 and up
Library Catalog / OverDrive
“It's 1954 San Francisco, and 17-year-old Lily Hu is the epitome of a ‘good Chinese girl': She's modest, respectful of her parents, and her most outlandish interest is rocket science. Then she finds a magazine ad for Tommy Andrews, male impersonator at the Telegraph Club, and everything changes. She befriends classmate Kathleen Miller, who's into airplanes and knows about the Telegraph Club too, and all of her unspoken feelings begin tumbling out. The pair sneak out to the club, and Lily is both overwhelmed and thrilled as she is enveloped by the San Francisco lesbian scene. But the girls' secret is dangerous; it threatens Lily's oldest friendships and even her father's citizenship status. Eventually, Lily must decide if owning her truth is worth everything she's ever known.” –School Library Journal