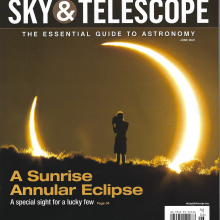 On the morning of June 10th, early risers in the Northeast US  will – weather conditions permitting – be treated to the most unusual sunrise of their lives, for we will not see a yellow-orange circle of light, but a large solar eclipse which will transform the Sun into a fiery scimitar!

From the Tri-State Area, sunrise is at 5:24 a.m. and maximum eclipse comes nine minutes later. Eighty percent of the Sun’s diameter will be obscured. Such a circumstance is very rare, having occurred only twice in the past 150 years (in September 1875 and October 1959). Eclipses of the Sun and Moon are dramatic natural events which have been described in records going back for centuries in many civilizations. Ancient astronomers discovered certain cycles of occurrence of eclipses, which then allowed prediction. Accurate prediction could command power and prestige.

In this presentation by Joe Rao, we’ll examine the mechanics of what causes eclipses as well as look at events coming our way in the future, including the total solar eclipse that will be visible from upstate New York and New England on April 8, 2024.

Joe Rao was Chief Meteorologist for News 12 Westchester for 21 years, garnering 8 Emmy Nominations, as well as many awards and citations. Rao comes highly recommended by astrophysicist Dr. Neil deGrasse Tyson and Editor-in-Chief of the Farmers’ Almanac, Peter Geiger. In 2015 he won top honors in the category “Best Weathercast” by the Associated Press of New York. Since 1986 he has served as an Associate Astronomer at New York's Hayden Planetarium.