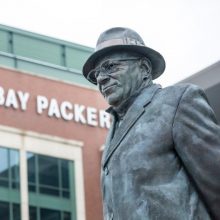 One of the greatest coaches in pro football, Vince Lombardi's leadership skills resulted in ten winning seasons and five championships. The Super Bowl trophy is appropriately named after him.

His management keys of diversity, tolerance and attacking bigotry proved well in Green Bay.
Lombardi broke down barriers for athletes of color in Wisconsin's NFL outpost. It should be no surprise Lombardi employed the same successful tactics in changing the Washington Football Team's culture for gay players.

John Vorperian, a published sports historian & host of BEYOND THE GAME will take us back to 1969 to hear Vince Lombardi exploits and how Tolerance finally brought a winning year to the Nation's Capital's Football fans.