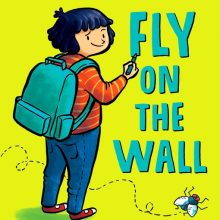 Dive Into Diversity: Let’s Go on a Trip

It’s summer break and perhaps your family is traveling! If that isn’t the case, here are a few recommendations of great diverse stories about going on a journey that you can stay home and enjoy! 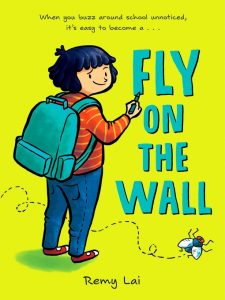 Fly on the Wall by Remy Lai
For children in grades 4-7.
Library Collection: Print
OverDrive: eBook
Twelve-year-old Henry Khoo believes that his family babies him. His sister’s nickname for him is Bao Bao, which means baby in Mandarin. Although it never used to bother him, the nickname recently makes him feel like punching a pillow or slamming a door. Henry lives in Perth, Australia with his Mom, Popo, and older sister that he calls Jie while his Dad lives in Singapore. During school break, they all travel to Singapore to visit his Dad. But this year, his Mom, Popo, and Jie decided they wouldn’t go and Henry was met with a resounding no when he suggested traveling there by himself. That was when he came up with The Plan to travel on his own without telling anyone. Then his family would finally learn that Henry Khoo is not a baby. On top of this journey, Henry bribed Pheebs, his former Best Friend Forever turned Not Really Friend Forever, to be his alibi for The Plan. He’s also dealing with how his webcomic about the gossip and rumors at his school, Fly on the Wall, went viral. Now his classmates, teachers, and especially his principal all are super curious to discover who the author is. Fly on the Wall is done in diary style with a combination of text and graphics since it is what Henry is writing in his notebook. His voice and the way he writes as well as draws in this notebook is incredibly amusing! Lai has developed him into quite the witty character. The story is very funny at times but also fairly emotional as Henry navigates how he’s feeling about the issues he’s been having with classmates and the constant overbearingness of his family. This book is excellent and I finished it quickly since I needed to know how it all played out! 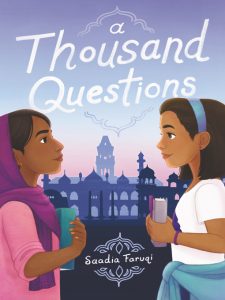 A Thousand Questions by Saadia Faruqi
For children in grades 4-6.
Library Collection: Print
OverDrive: eBook
“Faruqi (A Place at the Table) deftly explores Pakistani culture through the dual perspectives of Mimi and Sakina, two girls from different backgrounds. Eleven-year-old Maryam ‘Mimi' Scotts lives in Texas with her Pakistan-born single mother, after her American father, who is white, left them to further his journalistic career. Financial difficulties have forced them to return to Karachi, her mother’s birthplace, to visit the grandparents Mimi has never met. In Karachi, 11-year-old Sakina’s diabetic father is a servant for Mimi’s grandmother, whose callous pride alienates her dependents; Sakina helps him in the kitchen but longs to attend New Haven School, whose admissions test she has already failed once due to a low score in English. After a rocky beginning, the girls start to grow closer: Mimi agrees to help Sakina improve her English, and Sakina helps Mimi locate her father. Cultural differences complicate the budding friendship: humor is occasionally lost in translation, and both are initially quick to condemn the other’s lack of cultural knowledge as ignorance. But the likeable heroines develop a touching connection that enhances the fast-paced plot and counterpoints tense situations with their families. The novel’s observations about other societal issues—including religion, politics, wealth, and marriage—add thought-provoking touches.” –Publishers Weekly 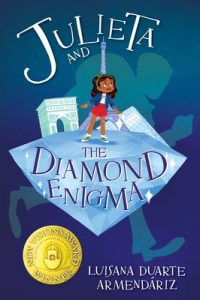 Julieta and the Diamond Enigma by Luisana Duarte Armendáriz
For children in grades 3-6.
Library Collection: Print
“This gentle, fast-paced mystery will hook readers with interesting details. Julieta Leal, 9, is a magnet for disasters. She has a reputation at Boston’s Museum of Fine Arts, where both her parents work, for making trouble. Julieta is just trying to help, and it’s not her fault that sometimes things get broken or she has a hard time following the rules. When Julieta’s dad invites her along on a trip to Paris regarding the loan of some pieces from the Louvre, she jumps at the chance to add another purple pin to her family’s world-travel map. She promises to be helpful and stay out of trouble and desperately wants to shed her reputation of being a liability. This proves difficult when the dazzling Regent Diamond is stolen and Julieta and her dad are implicated in the theft. With her dad’s job in peril and the prized gem missing, Julieta must rely on her keen observations and tenacity to clear their names. Detailed descriptions of Paris landmarks and factual information about museum pieces are woven naturally into the fast-moving plot so that readers come away with knowledge of these topics alongside a satisfying story. Several pages of backmatter notes bolster the learning. The endearing Julieta is bilingual, and she and her family are Mexican American.” –Kirkus Reviews