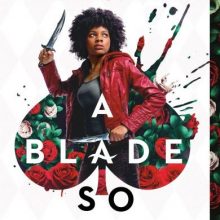 Dive into Diversity: YA Retellings

In 2021, my Dive into Diversity posts about young adult books will focus on a different genre each month. I’ll highlight books with characters that represent a range of experiences and identities. I’ll also feature authors who share an aspect of their characters’ identity as much as possible. I was somehow able to wait until July before writing about one of my favorite types of fiction: retellings of fairy tales and classic stories.

This month I read A Blade So Black by L. L. McKinley, a retelling of Alice in Wonderland. In this version, Alice stumbles into an awareness of Wonderland when she's attacked by a horrible monster and saved by a mysterious fighter by the name of Addison Hatta. This experience awakens Alice's natural aptitude for fighting monsters, and she becomes Addison's apprentice in Wonderland. She's also grieving her father's recent death and balancing her Nightmare-fighting adventures with her mother's new overprotectiveness and her commitments to her best friend. Just when Alice decides to take a step back from fighting monsters, an evil force appears in Wonderland, necessitating a quest for a magical object that will help Alice save the day. This version of the classic Alice tale had a lot more sword fighting and action than the original, and I really enjoyed all the little details that made Wonderland a beautiful, strange, and real place for the reader.
If you'd like to read this story, you can access it here: Library Catalog / Hoopla / OverDrive

Never Look Back by Lilliam Rivera
Grades 9 and up
Library Catalog / OverDrive
“This is a modern retelling of the Orpheus and Eurydice Greek myth featuring Latinx teens. Eury and her mother lost their home to Hurricane Maria but Eury knows it was no ordinary storm. The death spirit Ato befriended Eury as a child. As she grew older, he became more possessive and sinister, wreaking havoc to get her attention and promising to take her to el Inframundo, the Underworld, so they could be together forever. No one believes Eury and she is wary of trusting people with her secret. While visiting her cousin in the Bronx, she meets Pheus, a talented and charming Afro-Dominican bachata musician. Pheus wants to spend all his time getting to know Eury and soon learns that her traumatic experience in Puerto Rico was created by a supernatural being, something outside of his comfort zone. Spending time with Eury makes him reevaluate his life, the way his friends treat others, and his casual romances. When Ato finally succeeds in taking Eury to the Underworld, Pheus risks everything to bring her back but must follow the cardinal rule of all myths: Don't turn around.” –School Library Journal

Roman and Jewel by Dana L. Davis
Grades 9 and up
Library Catalog / OverDrive
“Sixteen-year-old Jerzie Jhames is a Black singer from New Jersey who dreams of being a Broadway star. She auditions for the role of Jewel in Roman and Jewel, a hip-hopera retelling of Shakespeare's Romeo and Juliet, and is disappointed when she only gets the part of standby to superstar Cinny, who plays the lead. On her first day of rehearsals Jerzie meets Zeppelin, the musical's Roman, and declares it love at first sight. When a video of Jerzie and Zeppelin singing a duet goes viral, Jerzie begins to realize that she may be in for more than she anticipated. Conflict arises when Cinny stakes her claim on Zeppelin and warns Jerzie to stay away from him. Despite her occasional resistance, Jerzie comes to find that she will need the support of her friends and family to help her navigate both Broadway and first love.” –Kirkus Reviews

Cinderella Is Dead by Denise Bayron
Grades 8 and up
Library Catalog / OverDrive
“In the town of Lille, Cinderella is not just a romantic fairy tale, it is the foundational story that undergirds the very culture and law of the land of Mersailles. Despite the grandeur of the ball custom, where annually girls of age are chosen by their own Prince Charmings, in reality it’s nothing more than a ploy that renders its women vulnerable—especially those not chosen. So, when 16-year-old Sophia’s invitation to the ball finally arrives, she is determined more than ever to follow her heart and flee from the restraints of King Manford’s rule—even if that means leaving her family and best friend (and lover), Erin, behind. With the help of Constance, a descendant of Cinderella’s stepsister, and Amina, Cinderella’s supposed fairy godmother, Sophia attempts the impossible: dismantling a broken kingdom and taking down Manford once and for all.” –Booklist Reviews

Blanca & Roja by Anna-Marie McLemore
Grades 8 and up
Library Catalog / OverDrive
“Sisters Blanca and Roja attempt to escape their family curse in this mashup of ‘Snow-White and Rose-Red' and Swan Lake. As long as anyone in the Latinx del Cisne (‘of the swans') family can remember, there have always been two daughters: One is destined to be transformed into a swan shortly after the younger sister's 15th birthday, while the other is left behind to live as a human. Fiery, darker-skinned, redheaded 15-year-old Roja has always believed she's the one the swans will claim, while kind, fair-skinned, golden-haired, 17-year-old Blanca has always promised Roja they would do everything to fight the curse. Despite being considered opposites, the sisters share a seemingly unbreakable bond that's tested when two missing local high school boys reappear in the woods near their home as a cygnet and a bear. White best friends Yearling, a boy from a rich but toxic family, and Page, a trans boy whose family are apple farmers, hide in the del Cisne home after returning to their human bodies. As love blossoms between the sisters and the best friends, they attempt to avoid a heartbreaking destiny.” –Kirkus Reviews

Forest of a Thousand Lanterns by Julie C. Dao
Grades 10 and up
Library Catalog
“Xifeng, a poor, beautiful village girl, dares to fulfill her destiny to become the Empress of Feng Lu. Guma raised her sister's bastard daughter with aspirations lifted from card readings and smoky, incense-filled visions. Xifeng is taught history and classic verse to prepare for a fate that ‘lies in the Imperial Palace,' but at 18 she escapes Guma's abusive love and runs away with Wei, her childhood friend and lover. Together, they embark on a journey through the Great Forest and discover friendship with Kamatsu's ambassador, a little person, and fierce warnings from the queen of the tengaru, ‘the demon guardians of the forest.' At the end of their journey, Xifeng must enter the palace alone, as lady-in-waiting to Empress Lihua, and learn to navigate the intrigue and treachery endemic among the eunuchs and concubines of Emperor Jun's court. With every step marked with both violence and poetry, will Xifeng sacrifice love and her own humanity to gain ultimate power?” –Kirkus Reviews

Ash by Malinda Lo
Grades 8 and up
OverDrive
“In this groundbreaking, gender-mixing retelling, it’s another woman at court, not the prince, who captures Cinderella’s heart. After she loses both her parents, Aisling, or Ash, becomes a beleaguered servant to her cruel stepmother and husband-hunting stepsisters, but an enchantment allows her to attend a ball, where the prince finds her irresistible. Here, though, is where Lo’s debut diverges from the original tale’s familiar plot points. The magical godmother in this story is actually an ethereal male, Sidhean, whose fairy kingdom lies hidden in the vibrant, wild forest that Ash loves. Among the trees, she also meets Kaisa, the king’s huntress, with whom she feels an overwhelming, real-world pull, and it’s Kaisa, not the prince, who inspires Ash to make a perilous, soul-threatening pact with Sidhean and attend the court balls in enchanted disguise.” –Booklist Reviews

The Wrath and the Dawn by Renee Ahdieh
Grades 9 and up
Library Catalog / OverDrive
“A reimagined tale based on One Thousand and One Nights and The Arabian Nights. In this version, the brave Shahrzad volunteers to marry the Caliph of Khorasan after her best friend is chosen as one of his virgin brides and is summarily murdered the next morning. She uses her storytelling skills, along with well-placed cliff-hangers, to keep herself alive while trying to discover a way to exact revenge on the Caliph. However, the longer she stays in the palace, the more she realizes there's more going on than just a murderous prince. While her feelings for the Caliph grow and change, the first love she left behind is busy plotting to overthrow the entire palace.” –School Library Journal