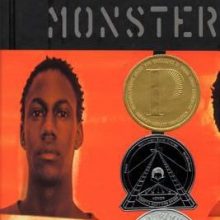 What You Need to Know About… Monster

Gone are the days when every middle school and high school summer reading list was full of titles by Walter Dean Myers. While at one time, Myers was the go-to author for diverse characters, because he was one of the only authors of diverse characters, we are now fortunate that the publishing industry has begun embracing diverse authors.  WIth this shift in the publishing industry, and public desire for diverse works, there is an increasing body of wonderful and important works by newer writers such as Jason Reynolds and Angie Thomas. But this doesn’t mean that Myers' books are no longer poignant or any good. Walter Dean Myers is a brilliant author whose work still holds up. So much so that Netflix has recently released a movie adaptation of Monster, originally published in 1999. 22 years after it was written, the story has finally made it to screen. This is surprising because Myers wrote the book in the style of a movie script with camera cues, fade-ins and dialog. Monster is the story of Steve Harmon, a student at Stuyvesant High School, part of the film club. He has been arrested and charged as being an accomplice to a felony robbery and murder. But the facts are very unclear: was he an accomplice or just in the wrong place at the wrong time? Follow his story, written by him while on trial, and come to your own conclusion: is he guilty or innocent?

And welcome back Walter Dean Myers. Hopefully this movie will bring a resurgence to your catalog of wonderfully written, poignant books about race in America.

July 27, 2021 10:00 am | by Erik, Teen Librarian
Categories: Authors & Books, Featured, Homepage Teens, Library News, and Teens.
Tags: teen movies, teens, What You Need to Know About, and YA literature.