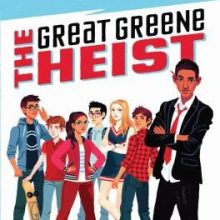 White Plains is a wonderfully diverse community! Parents, children, and teens have expressed an interest in titles that reflect the diversity in the community, and Ashley, Kathlyn, and Raquel's “Dive Into Diversity” column will spotlight noteworthy children's and teen titles that are inclusive, diverse, and multicultural to fulfill that interest. Ashley's portion is aimed at readers in grades 4-6.

As inevitably happens this time of year, summer break is unfortunately coming to an end! Get in the mindset for a new school year by reading one of these awesome diverse school stories!

The Great Greene Heist by Varian Johnson
For children in grades 5 and up.
Library Collection: Print
OverDrive: eBook

As a new school year begins for thirteen-year-old Jackson Greene, he’s trying to focus on putting the Blitz at the Fitz and the Kelsey Job behind him. He is reformed and won’t be doing any more scheming or pranking. But that all changes when he learns that his former friend Gaby’s shot at winning the election for Maplewood Student Council President could be squashed. A shady deal has been made between the other candidate Keith Sinclair and Dr. Kelsey, the Maplewood Middle School principal, to ensure his win. Something must be done to keep this nefariousness from occurring and especially since Keith is planning to cut funding from the majority of clubs except the one he and his friends are involved in. Although Jackson swore he wouldn’t plan another con, he thinks it’s time to come out of retirement for the greater good of his fellow students. Find out if he and the team he assembles to pull off this heist make sure that Keith never becomes Maplewood Student Council President by checking out a copy of this book! This tale has a lot of characters and I definitely felt that the cast list included helped me keep track of them all. I found myself totally hooked after the first few chapters once I got the hang of who the main players are. At first, I was thinking that a middle school student con artist is totally unrealistic. But then I remembered how freaking smart kids and tweens are and how they really can achieve anything they set their mind to. Making sure a classmate doesn’t steal an election is definitely putting con artist skills to use for a good reason! This story is really worth the read since the characters are clever and the plot is really amusing as well as enjoyable!

“Brianna Justice is good at setting goals and knows what she wants for her future: to become fifth-grade class president and eventually be rich and famous with her own cupcake business and cooking show. She's sure the former is the path to the latter and has been planning her election strategy all summer. When unscrupulous newcomer Jasmine runs against her, the competition takes an ugly turn with both girls trying underhand tricks in order to win. The story begins to resemble a Mean Girls of elementary school as Brianna makes one bad decision after another, turning into a rather unlikable character and nearly losing her friends in the process. She learns from her mistakes, however, and is able to turn both her friendships and the election around. The story will resonate with preteens navigating the ups, downs, and drama that come with the territory of many young girls' friendships.” –School Library Journal

Save Me a Seat by Sarah Weeks and Gita Varadarajan
For children in grades 3-6.
Library Collection: Print
hoopla: Audio
OverDrive: eBook

“Just arrived from Bangalore, Ravi Suryanarayanan is eager to make friends at his new American school. When he spots Dillon Samreen, a popular, cool classmate with swoopy bangs and a big smile, Ravi believes the two could become great friends. Even if Dillon is an ABCD—American-Born Confused Desi—another name for U.S.–born children of Indian immigrants, Ravi believes catching Dillon’s attention will take him from the lame table in the cafeteria to where the popular kids eat. Meanwhile, all white Joe Sylvester wants is not to catch the attention of Dillon Samreen. Joe is large and awkward and completely aware of how Dillon can smile at you one minute then torture you forever and ever. When Ravi, Joe, and Dillon wind up in Mrs. Beam’s class, the trio are on a collision course that will end with the unlikeliest of friendships.” –Kirkus Reviews