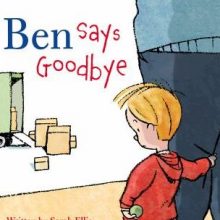 Big changes like moving are hard for everyone, but especially hard for children. Here are some things I learned from my move last year, tips from the pros, and some nice books you can share with your children to prepare them.

My five-year-old son was afraid that he would forget his old house. Mind you, this was after we convinced him that all his toys would, in fact, be coming to the new house with us. So, we decided to have him make a video tour of the old house. He went from room to room, explained what he did in each room, and what he did and didn’t like. He enjoyed making it, having a visual record helped alleviate some of his fears, and he has watched it several times in the year or so since we moved. To acclimate him to the new place, we also drove several times to our new neighborhood. We went for walks near the new house, found some nearby playgrounds, showed him where he’d be going to school, and got him excited to be in the new neighborhood. We were lucky that we moved fairly locally and could do these things in person, but you can accomplish similar things by using Google Maps and other tools. As much as I hate to admit it, another thing that I found helpful was joining local social media groups. I was able to get the sort of information you can only find from lived experiences, and meet some people with children around the same age as my son. Between all of our adventures and the people we’d met online, my son was able to start Kindergarten knowing children in the neighborhood and the neighborhood itself.

With that said, you may want some advice from the experts. Parentingsquad.com is a nice resource for parents in general. It consists of bloggers from all walks of life discussing a variety of parenting issues. It has several articles with tips for moving with children: here, here, and here.

Everyone agrees that you should prepare your child for a move. Stories are a safe way to broach this with your children long before they have to deal with the potential anxiety of a move. Thankfully, the Library has a few we can recommend:

Before I Leave by Jessixa Bagley
Library Catalog

When You Are Brave by Pat Zietlow Miller
Library Catalog / OverDrive