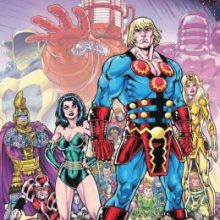 What You Need to Know About… Marvel’s Eternals

Disney is adding the Eternals into the MCU this November, but who are they? At first glance the Eternals look like souped up X-People (that’s right, I said “people” to fight our patriarchal society, deal with it), who have been around a really long time. The Eternals were created by Jack Kirby in the 70’s. Jack Kirby gave us Captain America back in the 40’s, was one of the principal authors of Marvel’s silver age, and brought X-Men (fine, I said it but only because that is the title, hence the italics). The Eternals were then brought back by Neil Gaiman (Sandman, Coraline, American Gods, the list can go on forever) in the 80’s. This is important because Gaiman and Kirby are/were obsessed with mythology. This is what sets the Eternals apart from other superheroes and why they can bring in a whole new level to the MCU. They are more than X-People (-_o) and way stronger than Thor. Plus they have history, lots of history, because they are well, Eternal.

The Eternals were created by the Celestials, who were the ones who could harness the power of the Infinity Stones with no problem. In the MCU the Celestials were introduced in the Guardians of the Galaxy films Volume 1 & Volume 2. The Celestials were fascinated with early humans, and thought “wouldn’t it be fun if we did some experiments on these creatures and see what happens.” So they did, then left. So the Eternals were created, had some crazy super skills, which includes being eternal. They can die, but they are reborn again. Throughout time they have watched humanity from the shadows. They were given some directives which I won’t get into. The Celestials did some other experiments but these didn’t go so well ¯\_(ツ)_/¯, these experiments gave us the Deviants, who are the Eternal’s nemeses.

It’s hard to tell what Disney has planned for them in the MCU. One main question is, “where were they when Thanos made half the population of the universe disappear?” Especially since Thanos himself is/was a Deviant. Maybe Thanos wasn’t powerful enough to garner their attention, which means that a whole new level of villains will enter the MCU. If this is the case, what does this mean for the Avengers? They could barely handle Thanos, so what will they do against other Deviants?

There are plenty of rumors out there on the interweb. There seems to be some speculation that connects the Eternals to Captain America. Some are saying the Deviants won’t be used, or that the Deviants are actually the Skrulls. Another rumor references Neil Gaiman’s comics where the Eternals had amnesia and forgot who they were. If there is one thing I have learned from the MCU, it’s that Disney is full of surprises. I am hoping that this is an origin story and we will see more of the Eternals in the next stage of the MCU. One thing I know for sure is that whomever they are going to fight in this movie will be very powerful. “Big CGI fight comin’ up.”

You can watch the trailer here, then search for theories after.
Want to find the Eternals at the Library?