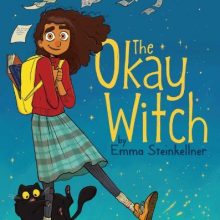 In 2021, my Dive into Diversity posts about young adult books will focus on a different genre each month. I’ll highlight books with characters that represent a range of experiences and identities. I’ll also feature authors who share an aspect of their characters’ identity as much as possible. In honor of Halloween, this month's post is a roundup of YA fiction starring… witches!

This month I read a popular graphic novel, The Okay Witch by Emma Steinkellner. It's about 13-year-old Moth Hush, who lives in Founder's Bluff, Massachusetts, and loves all things witchy. While working on a school play about a colonial-times witch hunt that took place in her town, Moth discovers a family connection to the Founder's Bluff witches. Along with a surprising familiar, she investigates new layers to her identity and family, while exploring a new world. I really loved the art in this graphic novel, which gave so much depth to the character's facial expressions and really helped establish the unique setting. It was a great read to get in the mood for Halloween, and I will definitely be reading the sequel.
You can find a copy here:
Library Catalog / OverDrive

“Sorcery, spite, and superstitions: this Jamaican-inspired young adult fantasy novel is imbued with a dense magic system and, in the center of it all, two witches fighting a common enemy. Princess Jazmyne's mother all but wiped out prisoner Iraya's family, a former ruling faction on the island of Aicaya. While Ira seeks vengeance, Jazmyne herself realizes the unsettling cruelty of her mother and wishes to change the present way of ruling. Ira's calculating style may clash with Jaz's brash and at times impulsive ways, but they both aspire to have Aicaya under peaceful rule once again. Unfortunately for both of them, evil has a way of sifting to the top.” –School Library Journal

“Just as trans witch Wyatt begins to feel comfortable in his new life with his adopted human family and best friend Briar, he is ripped away from the human world and forced to face his traumatic past as the chosen mate of the future king of the fae. In Edgmon's complex fantasy society embedded in our contemporary world, the fae are the conservative ruling elite, hiding from humans and oppressing an underclass of witches. As the only witch in his fae family, Wyatt grew up between two worlds, made safe only by the favor of Emyr, the future ruler who chose him as his future mate. Now, having transitioned and escaped in the wake of a disaster that turned the fae world against him, Wyatt finds himself back in a deeply divided society, where Emyr's progressive policies face violent conservative backlash that spells danger for all those who deviate from “the ways of Faery.” This book masterfully weaves Wyatt's re-traumatization, his complicated feelings about his former best friend and love interest, Emyr, and his desire to escape a destiny that he never chose.” –School Library Journal

“Katrell Davis can talk to the dead. She doesn't know why or even how her powers work, but for a small fee, clients pay her to communicate with their deceased loved ones. When she accidentally brings her dog back from the dead, everything changes. Understanding that a live body is worth a lot more than a ghost–and she might not have to worry anymore about the bills each week–Katrell moves forward with this lucrative new business even as each resurrection makes her sicker than the last. When bad things start happening and she attracts the attention of some dangerous people, she must decide whether the money is worth it.” –Kirkus Reviews

“Grief and empowerment lace this engrossing duology opener as it careens from boarding schools to basement pit fights in a casually diverse 1911 New York. Since her brother William's murder, sweatshop dressmaker Frances Hallowell, 17 and presumed white, lives in poverty and has closed off her heart. But when an assault by her drunk employer wakes her inborn magic–and ends with him dead–she's swept away to the overgrown, walled Haxahaven Academy: a school for female and nonbinary witches that's disguised as a tuberculosis sanitarium. Soon, hints about William's murder appear in Frances's room, and his Irish friend Finn, part of a magical gentleman's club, offers to teach her a spell to speak with the dead. But as the students' ambitions surpass learning to dampen their magic, dreamwalker Finn haunts Frances's sleep, and more boys die, Frances must stop the murders–and find a way to own her magic.” –Publisher's Weekly

“Who can't love a story about a Nigerian-American 12-year-old with albinism who discovers latent magical abilities and saves the world? Sunny lives in Nigeria after spending the first nine years of her life in New York. She can't play soccer with the boys because, as she says, ‘being albino made the sun my enemy,' and she has only enemies at school. When a boy in her class, Orlu, rescues her from a beating, Sunny is drawn in to a magical world she's never known existed. Sunny, it seems, is a Leopard person, one of the magical folk who live in a world mostly populated by ignorant Lambs. Now she spends the day in mundane Lamb school and sneaks out at night to learn magic with her cadre of Leopard friends: a handsome American bad boy, an arrogant girl who is Orlu's childhood friend and Orlu himself.” –Kirkus Reviews

The Mermaid, the Witch, and the Sea by Maggie Tokuda-Hall
Grades 9 and up
Library Catalog / OverDrive

“Not just mermaids, a witch, and the sea, Tokuda-Hall also covers pirates, double agents, and the lure of forgetting. Evelyn, Lady Hasegawa, doesn't look forward to marriage, although the six-month sea journey to her betrothed offers her a delicious chance to be on her own. In alternating chapters, orphaned Flora, ‘the smallest sailor,' relates why she's called Florian aboard the ship, the cruelties that Florian and the crew have perpetrated, and those they have had to endure. Florian and Evelyn strike up a friendship, and when the voyage turns especially nasty, make their escape, taking with them a mermaid who had been captured by the crew. Friendship turns to romance, and then to bitter separation, as Flora struggles with guilt over her past, Evelyn appears headed for a wedding after all, and the crew of the Dove faces their full share of retribution.” –School Library Journal

“Chupeco craftily weaves magic, intrigue, and mystery into a captivating tale that will leave readers begging for the promised sequel. Being a witch, or an asha, is not out of the ordinary in Tea's world, but being a ‘bone witch' is another matter entirely. After Tea accidentally raises her brother from the dead, she discovers that she is destined to become one of the infamous Dark asha. Dreaded and feared yet highly valued for their services, the Dark asha are the only ones who can tame the demonic daeva, who threaten the kingdoms, but their taming comes at great expense. Tea must decide if the cost of losing her life, one battle at a time, is worth staving off the demonic onslaught. Or can she choose another path to save herself, her friends, and the boy she loves?” –School Library Journal

“When 11-year-old Effie's mother dies, she is taken to live with her elderly, snarky, fashion-forward aunt, Selimene, and her partner, Carlota, in Brooklyn. Until Effie's music idol, Tily Shoo, arrives with an incurable curse, Effie thinks her aunts are herbalists and acupuncturists. Secretly, they're also witches! Is Effie a witch too? Magic or no magic, Effie learns there's power in finding one's true self and that the path to happiness comes from serving others.” –Kirkus Reviews