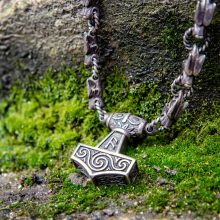 What You Need To Know About… Ragnarok

Netflix has a fairly new TV series called Ragnarok (seasons 1 & 2 are available to watch). Don’t be confused by the title, this has nothing to do with Thor: Ragnarok from the MCU. No, this is actually based on Norse mythology, not just the popularized versions of Thor, Loki, Odin, and Freya from the Marvel movies.

The show was filmed in Norway with an all Norwegian cast. It is a modern telling of Ragnarok, the end of the world, which will happen in the small coastal town of Edda. The Giants (the enemies of the Aesir (Norse Gods)) are actually giants of industry and have been polluting the water and air, creating unhealthy work conditions in their factory, and profiting from all of this. Pollution is their new way to bring about the end of the world. Wenche, an old lady in the town who is actually Völva, a seeress (a norse prophet), realizes the time has come to fight, and reawakens Thor in a young man, Magne, whose family just moved back to town.

Here is my quick breakdown of what is different in the show compared to the movies. To start, Thor is a big, dumb, idiot! The MCU makes him look far more coherent and smart than he really was. Loki is the first ever gender fluid god, and with magic on their side, they can change their gender at will. Freyja is not Thor and Loki’s mother. She is a Vanir, a different group of gods who joined the Aesir as a peace token. Freyja is reawakened in a young woman who goes to school with Magne/Thor. The dark elves created Mjölnir, they weren’t the enemies. The Giants are the enemies, but were once considered gods. Ragnarok is the end of the world, not the end of Asgard. There are many Aesir (gods), but you only need to know about one, Tyr. Tyr is the god of war and overseer of law and justice. Spoiler alert, Tyr has only one arm, the character who Tyr is reawakened in has two (⊙.⊙).

The final thing you will want to know is how to change the language on Netflix, unless you want to read A LOT!

If you want to learn more about Norse mythology of like re-imaginations check out these titles: