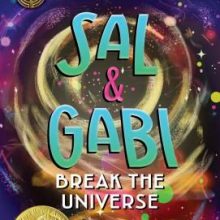 White Plains is a wonderfully diverse community! Parents, children, and teens have expressed an interest in titles that reflect the diversity in the community, and Ashley, Kathlyn, and Raquel's “Dive Into Diversity” column will spotlight noteworthy children's and teen titles that are inclusive, diverse, and multicultural to fulfill that interest. Ashley's portion is aimed at readers in grades 4-6.

National Comedy Day is held on November 7th. To celebrate, here are some humorous diverse book selections that may make you laugh!

Even though Sal Vidón has just started at Culeco Academy, a school for gifted students of the arts, he’s already having issues. It’s only been three days into the school year and he’s already had to visit the principal’s office three times. The first time involved Sal going to Principal Torres to explain how he carries around a diabetes bag since he’s a type-one diabetic. The second time had to do with being sent to the principal’s office for eating Skittles during PE class even though he needed a boost to treat low blood sugar. The third involved a confrontation with another student named Yasmany who begins to bully Sal after he attempts to help Yasmany with opening his locker. In order to save himself from a fight, Sal uses his ability to rip open a hole in time and space to plant a raw chicken in Yasmany’s locker as a distraction. This incident leads to Sal meeting Gabi Reál and a whole lot of shenanigans going down as they become friends and Gabi learns more about his ability. Although this story does deal with some tough topics, this book is so super comical! Hernandez’s descriptions are so unique and really fascinating. His characters have such personality and layers – they’re really well developed as well as vibrant. I genuinely found it really difficult to write about the plot in this book since it is definitely a science fiction and fantasy story as well as a really amusing one. All I can say is that it is an absolutely fantastic book and I look forward to reading its sequel at some point!

“Readers don't have to share Millicent Min's IQ to empathize with the 11-year-old genius narrator featured in this energetic first novel. Millicent breezes through high school and college classes, but when it comes to making friends her own age, she's at a loss. In an attempt to give her daughter ‘a more normal and well-rounded childhood,' Millicent's mother signs her up for a volleyball league. Even though the narrator abhors the idea of playing a team sport (‘As I see it, my childhood is round enough,' she remarks), going to practice does give her the opportunity to form a solid camaraderie with new-girl-in-town Emily, who hates volleyball as much as Millicent does. Not wanting to jeopardize her precious new friendship, Millicent keeps her mental capabilities a secret; as might be expected, deception soon leads to disaster. When Emily turns her back on Millicent for pretending to be someone she's not, Millicent must solve a problem more difficult than any math equation or test question. How can she regain Emily's trust? Millicent's unique personality—a blend of rationality and naïveté—makes for some hilarious moments as the young protagonist interacts with a cast of colorful characters including her athletic, down-to-earth mother, her laid-back father, and her beloved grandmother, who borrows sage advice from the television show, Kung Fu. Yee re-examines the terms ‘smart' and ‘dumb,' while offering a heartfelt story full of wit.” –Publishers Weekly

“Readers will be immediately drawn into the zippy first-person voice of Lupe Wong, future first female pitcher in Major League Baseball and defender of social justice. Young people will identify with the torture that is the middle school square-dancing unit. Lupe is determined to fight for the right to not participate. In order to earn the privilege of meeting her favorite baseball player she must get straight A’s, and that includes square dancing. Her grandfather’s wisdom influences her to choose to ‘overcome instead of fighting.' Lupe finds that trying something new, and adding her own spin on it, can make her life richer. Readers will enjoy the time spent with Lupe; reluctant sports-loving readers might even find reading as palatable as Lupe eventually finds dancing. Lupe must also learn to navigate the rough waters of friendship in seventh grade when everything gets complicated. Debut author Higuera imbues the text with diversity through cultures and family structures, as well as neurodiversity; Lupe’s friend Niles is autistic. Lupe manages to make the square-dancing unit work, all while fixing some age-old traditions that are no longer culturally relevant. Kids becoming aware and ready to fight for social justice causes will be inspired by Lupe, who learns to sift through what she doesn’t like and fight for that which is most important.” –School Library Journal