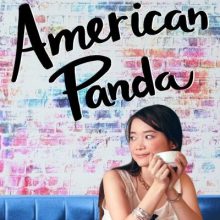 Dive into Diversity: YA Humor

In 2021, my Dive into Diversity posts about young adult books will focus on a different genre each month. I’ll highlight books with characters that represent a range of experiences and identities. I’ll also feature authors who share an aspect of their characters’ identity as much as possible. This month I've collected humorous YA books, from romantic comedy to dark humor. YA is not typically known for its comedies, so this was a bit of a challenge. While not all of the books below will be entirely positive or uplifting, all contain an aspect of humor.

This month I read American Panda by Gloria Chao. It's about MIT student Mei Lu, who is navigating her first year in college under heavy parental and cultural expectations. Her parents expect her to become a doctor, but Mei is a self-described germophobe who carries hand sanitizer at all times (I'll note that this book was written pre-pandemic, when hand sanitizer was less ubiquitous.) The pressure is intense, especially because her family disowned Mei's older brother for falling in love with a woman who is described as “reproductively challenged.” While the book definitely deals with serious topics and painful experiences, Mei gets into some pretty hilarious situations at MIT and her sense of humor definitely shines through. I really enjoyed following along with Mei's journey to find a way to live authentically.

Charming as a Verb by Ben Philippe
Grades 9 and up
OverDrive / hoopla / Library Catalog
“A charismatic 17-year-old boy used to hustling his way through life meets his match. Henri Haltiwanger, who is Haitian American, has a face for everyone—the wealthy owners of the dogs he walks under his guise of a business, the rich kids he attends Fine Arts Technical Education Academy with on Manhattan's Upper West Side, and anyone else who can help further his dream of attending Columbia University. He takes pride in his charm until Corinne—classmate and neighbor—blackmails him into helping her fix her reputation for being excessively intense and lacking in social graces.” –Kirkus Reviews

Strangers Assume My Girlfriend is My Nurse by Shane Burcaw
Grades 10 and up
OverDrive / Library Catalog
“In the follow-up to his memoir Laughing at My Nightmare, Burcaw recounts his life with spinal muscular atrophy in this collection of 23 essays. Equal parts humorous, tender, and insightful, the pieces give an unfettered look at Burcaw's life and the assumptions others make about living with a disability. Vignettes include a disastrous trip to New York City with a dying electric wheelchair, starting a career as a motivational speaker, falling in love, and confronting the difficulties of transitioning to life outside of his parents' care…. At points, the book is laugh-out-loud funny, making a sometimes difficult subject matter approachable and engaging, and each essay is concise and highly readable.” –School Library Journal

What If It’s Us by Becky Albertalli and Adam Silvera
Grades 8 and up
OverDrive / hoopla / Library Catalog
“This team effort is a meet cute between two high school boys in New York City. Broadway-obsessed Southerner Arthur (in the city for a summer internship) wants his magical New York moment. So he follows a cute boy into a post office in the hopes of making it happen. But fate—in the form of a flash mob proposal—separates them before Arthur gets the chance to learn Ben's name. Each boy tries to find the other using small clues from their first meeting until, eventually, they're reconnected. When their first date—Arthur's first date ever, Ben's first since breaking up with his ex—doesn't quite go as planned, they have a do-over date. And another. And another. But, as Arthur's return to Georgia at summer's end draws closer, is their flash relationship fate?” –School Library Journal

A Pho Love Story by Loan Le
Grades 7 and up
OverDrive / Library Catalog
“Set in the Bolsa neighborhood of Westminster, CA, this romantic comedy, told in alternating first-person chapters, is a modern-day Romeo and Juliet that serves up family secrets and self-discovery with a side of hoisin sauce. The Mais and the Nguyens have been rivals ever since Linh's family opened a restaurant across the street from Bao's. But during senior year, they suddenly find themselves working together for the school newspaper on a series of local restaurant reviews. The story opens somewhat formulaically but evens out as tensions between the two restaurants rise and Linh and Bao begin to uncover truths about their families' shared past. In and out of school, Linh and Bao's burgeoning friendship believably turns into something more.” –School Library Journal

Ghost by Jason Reynolds
Grades 6 and up
OverDrive / Library Catalog
“Castle ‘Ghost' Cranshaw has been running for three years, ever since the night his father shot a gun at him and his mother. When he gets recruited by a local track coach for a championship team, they strike a deal: if Ghost can stop getting into fights at school, he can run for the Defenders, but one altercation and he’s gone. Despite Ghost’s best intentions, everyone always has something to say about his raggedy shoes, homemade haircut, ratty clothes, or his neighborhood, and he doesn’t last 24 hours without a brawl. Will Coach and his mom give him another chance to be part of something bigger than himself, or is he simply destined to explode?” –Booklist Reviews

Lycanthropy and Other Chronic Illnesses by Kristen O’Neal
Grades 7 and up
OverDrive / Library Catalog
“Nineteen-year-old narrator Priya Radhakrishnan feels like Lyme disease has stolen her life. Instead of studying pre-med at Stanford, she's back home in New Jersey with her loving and protective parents, struggling with debilitating fatigue, mental fog, and joint pain. Fortunately, she and her online friend Brigid-who's reluctant to share details about her own illness-find comfort and camaraderie in a virtual chronic-illness support group, whose members navigate diagnoses ranging from endometriosis to fibromyalgia…7. When Brigid ominously goes offline, Priya tracks her down and discovers her diagnosis: She's a werewolf, and she's getting worse. Can Priya help Brigid find a cure before she becomes a wolf permanently?” –Kirkus Reviews

Camp by L. R. Rosen
Grades 9 and up
OverDrive / Library Catalog
“Randy has spent summer after spectacular summer at Camp Outland, a camp for queer kids, where he gets to be his most extravagant self. It's been perfect, except for one thing: Randy's years-long crush on Hudson Aaronson-Lim, a supermasculine camper who famously only dates other masc guys. Randy is convinced that this will be the summer he lands the guy of his dreams. He's spent the whole year turning himself into the guy of Hudson's dreams to make it happen: he's buffed up, cut his hair, and changed his name to Del. It means no more camp musical, no more Unicorn Trampocalpyse nail polish, and no more wild outfits. Randy—er, Del—knows it's all worth it for love. But is this really love if Hudson doesn't know who he truly is?” –Booklist Reviews

Girls Save the World in This One by Ash Parsons
Grades 9 and up
OverDrive / hoopla / Library Catalog
“June loves zombies, and her friends have bonded over their passion for the undead. To June's surprise, Zombie Con is going to be held in her boring ole town. For one day, she can put her worries about applying to college behind her and have the time of her life. But things at Zombie Con are weird—there are real zombies there. Now June and her two best friends must take them on to save the town, and maybe even the entire world.” –School Library Journal

Nothing Can Possibly Go Wrong by Prudence Shen
Grades 6 and up
OverDrive / Library Catalog
“This story has everything: basketball, dastardly cheerleaders, a robot rumble, conniving geeks, a house party, family drama, student-council elections, and a tiny sliver of romance. Charlie, captain of the basketball team, and Nate, president of the Robotics Club, are neighbors and unlikely friends. When Charlie’s ex-girlfriend, the captain of the cheerleading squad, pits Charlie against Nate for president of the student-council in an aggressive bid to snatch Robotics Club funds for new cheerleading uniforms, dirty campaign tricks ensue, and friendships are tested.” –Publisher's Weekly