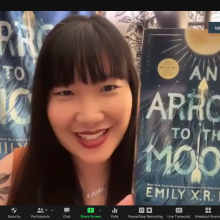 Emily X.R. Pan, the author of The Astonishing Color of After, sat down with our Forever Young Adult Book Club last month to answer questions and chat with patrons.

Keep your eyes peeled for upcoming Forever Young Adult meetings, special guests, and crafts! We'll be discussing Miss Meteor on December 16th and The Bear and the Nightingale on January 27th, both at 7:00 p.m.

The Astonishing Color of After, a New York Times bestseller, follows the story of Leigh Chen Sanders. Leigh, who is half Asian and half white, loses her mother to suicide. Leigh begins seeing a magnificent, fantastical bird which she comes to believe is her mother, transformed into a red crane and seeking contact with Leigh. To unravel this mystery, Leigh travels to Taiwan to meet her maternal grandparents for the first time. Throughout her search, Leigh uncovers family secrets and struggles to overcome cultural and language barriers to forge a relationship with her grandparents.

What was the inspiration behind The Astonishing Color of After? 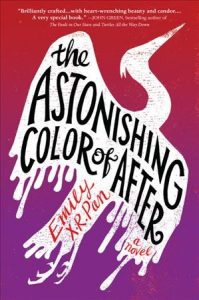 Astonishing came out in 2018. I started writing it in 2010 and originally I thought it was going to be this Adult literary historical fiction epic spanning the first 40 years of a woman's life, that woman being my grandmother, starting in 1927 up in the mountains of Taiwan. So, I wanted to write this ode to my grandmother because, and for those who read the entire book this will sound very familiar, my grandmother was sold as a baby to another family. Her family had too many mouths to feed and daughters weren't valued because daughters don't carry on the family name. You have to invest money to raise a daughter, clothe her, feed her, and then when she comes of age, you have to pay a dowry to marry her off to someone else and she becomes part of that family, she's no longer really part of your family.

I tried writing it as Young Adult, I tried writing it as Adult Realistic, I tried writing it as Middle Grade, and I kept pausing, turning to other projects, and then coming back to it. Then in 2014, I lost my aunt, she died by suicide, and it became this thing that I couldn't stop thinking about. A lot of the time, people want to spin this tale of suicide being something that happens out of the blue like we didn't see it coming. With my aunt,we saw it coming, we could tell it was coming, there were a lot of warning signs and that makes the guilt so much harder to sit with. When we lost her, I couldn't stop thinking about it and I also couldn't stop thinking about how there's so much depression in my family, and it could have been any other member of my family really, so that was the thought that was really sitting with me and kind of haunting me.

So in January 2015, I had just shelved this other novel that I was working on, decided that after thirteen drafts I needed a break from it, and I went back to Astonishing which, back then, my title for it was Upper Sea, Lower Sky, that was my working title from 2010 up through I think 2016. So, at the top of 2015, I sat down to rewrite the novel again from scratch for the umpteenth time. The opening pages poured out of me kind of in a fugue state. I don't want to romanticize the writing process because pretty much everything in the book has been rewritten a gazillion times except for those opening pages. There was some kind of frenetic energy that took over me and this never happens, most of the time, by the time I've finished something and it's ready for publication, it's unrecognizable from the first draft and I think that's very common. I did so much work but something about those opening pages, it was very propulsive, and it kind of drove the rest of the book.

We hosted a NaNoWriMo writing workshop for adults this year. Do you have any advice for aspiring authors, something that you've learned that continues to help you?

There's one universal piece of wisdom that I always want to give any writer. No matter how much of a veteran they might be, no matter how new they might be to writing and storytelling, and that is to read widely. Oftentimes, it's really easy to fall into the temptation of, “I'm a fantasy writer and I only really enjoy fantasy so I'm only going to read fantasy and I'm not going to read anything else” and that's really to your detriment because there is something to be learned from literally every genre and every age category.

Any form of storytelling, even poetry – poetry teaches me how to think about the rhythm of my words, how to think about how I'm playing with the shape of my sentences. I'm not the hugest fan of thrillers but I will read thrillers to look at how they are paced and how hooks are set up, how things are then played out. I'll read dense scifi novels – I'm not much of a scifi reader – but I will read the dense scifi novels to look at how the authors are doing their worldbuilding and how they're thinking about their characters inhabiting the world and how they're doing the work to make it feel very real. I'll read these dense literary epics in order to see how very specific human experiences and emotions are being captured and are being thought about and kind of manipulated on the page and then I'll read picture books to see how a narrative arc can be really condensed down into something so tiny.

So, I really strongly believe every single format that you can read has something to teach you. Even when you look at an advertisement, like if you're watching a commercial in the middle of a TV show or in the middle of a YouTube video, notice what storytelling elements are they using. How are they introducing a character, how are they getting you to feel like you want to side with that character? Similarly, I read books that I don't enjoy reading – I know a lot of people like to do the whole “DNF” thing, “Did Not Finish”, because life is short and you move on – but there's actually value. Say there's a hugely popular book, you know it's hugely popular, everyone has told you to read it, and you start reading it and you're 20% through, maybe halfway through, and you decide you hate it, you so completely hate it. But maybe you could read through to the end and really question what are the elements that make you hate it?

There's also trying to not be precious about first drafts. This is what the spirit of NaNo is. It's really hard and there's always that secret hope – every writer has it, that secret hope that we'll sit down, we'll type out a book, it'll just magically unfurl. It'll appear out of our fingers and it'll be pure gold. It'll be ready to go, it's going to win all the awards. It's magic. And that never happens, it's never the case. So I think giving yourself permission to write a garbage first draft is really important because, first of all, there are multiple points here that are worth considering. First, that it's important for you to get to the end, not just because you need to have gotten to the end of a draft in order for it to be a full draft and in order for you to revise it, but also you need to get to the end so that you can have that confidence in yourself, so that you can trust that you have the ability to finish it. We all have the ability to finish a novel that we start writing, the only way to fail is to stop working on it.

Second, I said that you can't revise until you've written the whole draft and what I mean by that is just like when you're reading a book and you're experiencing a story for the first time, it's kind of like if you're driving somewhere near or walking somewhere near, you've got the GPS, the GPS is telling you where to go, and you're just following. But it's not until you're rereading, and maybe it's not even until the 4th or 5th or 6th time that you're rereading, but you start to notice oh there's a crack in the ground here and that house looks a little bit weird like maybe someone built it wrong, or oh that tree must have gotten hit by lightning at some point and you start to notice all these details and you start to notice the seams of the story where the pieces come together. You start to notice how the author went about assembling the story. Similarly, until you reach the very end of your first draft, if you're doing NaNo, the fast tracking method, until you reach the end of the first draft, you don't actually know what the shape of your story is. I think that can be really hard to grasp if you've never written something and then revised it a million times. 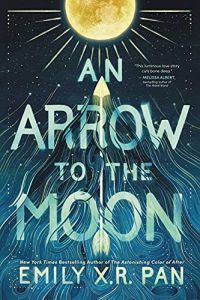