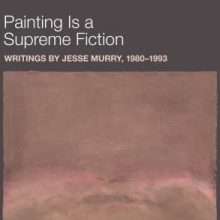 Jesse Murry was a Black, gay art critic, curator and painter. He was born in 1948 in North Carolina and later moved to nearby Greenburgh to live with an aunt. As a youth he spent a lot of time reading at the White Plains Public Library and became friends with the director, Isabel Duncan Clark, who ended up becoming his legal guardian.

He studied at Sarah Lawrence College and lived in a White Plains apartment in the 1970s before moving to New York City in 1979. In the last 14 years of his life he wrote for Arts Magazine, taught at Hobart and William Smith Colleges upstate, got his MFA at the Yale School of Art, and exhibited his paintings. He died too young, of an AIDS-related illness, in 1993 at the age of 44.

A collection of his writings, Painting is a Supreme Fiction: Writings by Jesse Murry, 1980-1993 (Library Collection), was recently published. The library has ordered a copy, and the December 2, 2021 New York Review of Books has a review which includes a brief biography of Murry (see the link below).

If you knew Jesse Murry when he lived in Greenburgh or White Plains, please feel free to share your recollections here or by emailing aduffy@whiteplainslibrary.org.