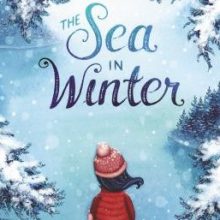 This is author Christine Day’s second middle grade novel but it’s the first story of hers that I’ve read. I now definitely want to read her first book, I Can Make This Promise, as well as Ancestor Approved: Intertribal Stories for Kids, the anthology that she contributed to! I really loved The Sea in Winter and it felt like just the right time for me to read it. The story takes place in the middle of February and focuses on the tough time main character Maisie Cannon has been going through ever since she tore her ACL back in October.

Seventh grader Maisie has been struggling to care about school as she ponders if anything she learns will be necessary for her adult life. Ballet had been her sanctuary since she was four-years-old and she’s been miserable for the last few months since a stupid decision led to her needing surgery as well as ongoing physical therapy. Her grades have gone down and she doesn’t have any friends at school. To make matters worse, her best friends are all gearing up for auditions with some of the best ballet schools in the country that are recruiting for their summer programs and that won’t be an option for Maisie due to her injury. As the February break begins, she keeps finding herself snapping at her mom, stepdad, and younger brother as they go on a family road trip around the Olympic Peninsula.

There was a lot in this book that I very much enjoyed! The author’s descriptions really bring the scenery in this story to life. As a native New Yorker, my knowledge of the West Coast of the United States is limited. Since this book takes place in a real area, I found it interesting to do some research and learn more about the various locations that are mentioned. I also liked learning some Native history that’s discussed in the story. Maisie’s mom is Makah from Neah Bay and her stepdad Jack is a citizen of the Lower Elwha Klallam Tribe from Port Angeles.

The main thing I took away from this book is that it’s okay to not be okay all the time. This is a quiet story in which not much happens plotwise. It’s instead a tale of resilience as Maisie learns to accept her current situation and to find joy in new activities. Some of my favorite lines of the story come from near the end of the book and have to do with the Field Day that Maisie’s younger brother participates in on his last day of school – “I nod along as Connor explains every single activity, every single trip and fall. Because he apparently fell a few times. But he got up every single time, and he keeps telling me over and over about how that’s the most important thing. And about how he learned that from me.”