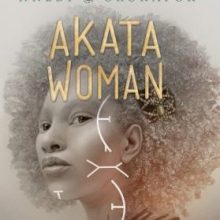 Despite the supply chain chaos that seems to have followed us into 2022, we’re still frequently ordering and receiving new books for our collection. I love ordering new books for the Edge–reading the reviews, seeing what popular authors come up with next, or finding out about an upcoming sequel to an old favorite. Read on to find out about some of the new YA fiction titles coming to our shelves this month.

At the End of Everything by Marieke Nijkamp
Grades 9 and up
Library Catalog
“The young adults who inhabit private company–run Hope Juvenile Treatment Center in rural Arkansas lead highly structured, strictly supervised lives, so it comes as a shock when they wake one morning to discover the doors unlocked and the brutal staff gone. A group heads on foot for the nearest town but finds the road blocked by armed soldiers, who order their retreat: the state is on lockdown thanks to an extremely contagious, frequently fatal respiratory illness. After an incident when a boy rushes the barricade, his companions return to Hope and update the others. Eight opt to escape and brave the wilderness; the remaining 22 stay put, divvying up chores and rationing supplies. They assume someone will come for them, but as time passes, provisions dwindle and the disease spreads, triggering desperation and discord.” –Publisher's Weekly

The Upper World by Femi Fadugba
Grades 8 and up
Library Catalog / Libby
“Esso Adenon, 16, is just trying to survive high school in South London, stay out of the Peckham and Brixton gang war, keep his Bénin-born mother stress-free, and find the courage to confess his feelings to his crush, Nadia. But life becomes more complicated when he’s involved in a car accident and time subsequently stops, allowing him to see what Socrates called the Upper World—a place where moments of the past and future collide. When Esso makes it back to the present, the scenes he witnessed begin occurring, and he works desperately to prevent one involving Nadia.” –Publisher's Weekly

The Ivory Key by Akshaya Raman
Grades 7 and up
Library Catalog
“Four royal siblings reunite, seeking the Ivory Key, a legendary object that could unlock an incredible source of magic and rescue their country from impending war. For centuries, Ashoka has relied on magic to fuel its economy and protect its borders. But the magic is running out, and Vira, the newly crowned maharani, is desperate. A suspect in the murder of Lord Harish, Vira’s betrothed, shows signs of ties to the Kamala Society, a secret organization that sealed all the magic quarries when Ashokan provinces fought to control the mining trade. To unlock them and save Ashoka, Vira must retrieve the Ivory Key, but she requires the help of her three estranged siblings, who each have their own reasons for obtaining it.” –Kirkus Reviews

Akata Woman by Nnedi Okorafor
Grades 7 and up
Library Catalog / Libby
“A Nigerian teen is pushed to otherworldly limits in search of a mystical object. Three years after discovering her power as a Leopard, Sunny Nwazue, now 15, must embark on yet another dangerous journey. Tasked with retrieving what the Nimm women (her and Chichi’s ancestors) stole from Udide, the Great Spider Artist, Sunny and her coven—even-tempered Orlu, brash Sasha, and clever Chichi—have no choice other than to comply or risk their pasts and futures. As events are set in motion to track down Udide’s scroll, Sunny must also learn how to be one with Anyanwu, her spirit face, now that she is doubled, a rare occurrence among Leopard People.” –Kirkus Reviews

Loveboat Reunion by Abigail Hing Wen
Grades 9 and up
Library Catalog
“The antagonists of Loveboat, Taipei (2020) try to shed their old ways and show the world that they have something to offer. Sophie Ha regrets her poor behavior during the Loveboat program, and she’s determined to be a better person as she starts college at Dartmouth. Familial pressure to marry well caused Sophie to prioritize romantic relationships above all else; now she plans to achieve success through studying AI. No more romance for her—especially not with Xavier Yeh, given their disastrous summer fling and current friendship. Meanwhile, in Los Angeles, Xavier is forced by his father, the CEO of a Taiwanese business empire, to repeat his senior year of high school. Xavier, who has dyslexia and dysgraphia, must obey in order to gain independence from a family that prioritizes its reputation above all else.” –Kirkus Reviews

Ashes of Gold by J. Elle
Grades 9 and up
Library Catalog
“The future of a nation rests on one girl’s shoulders. After Rue, an African American teen from Texas, discovered that her father was from a magical land near Madagascar called Ghizon, her world has been turned upside down. In a matter of months, she learned about the island’s terrible dark past and how her father’s people were forced into hiding after the Chancellor stole their magic and led the Grays to power. Now, the Grays are divided between loyalists and those rebelling against the Chancellor’s terrible actions. Meanwhile, Jelani, as Rue is known to the Ghizoni, has become a beacon of hope for her people: She and her friends Bri and Jhamal have decided to join the rebellion.” –Kirkus Reviews