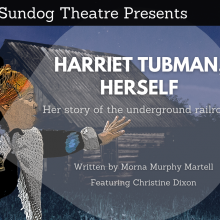 Tuesday, April 5th, 7:00 p.m. (virtual)
Grades 1+, Teens, Adults
Click here for the Zoom link.
Note: All of our youth-focused virtual programs require a registered Zoom account to attend. Sign up for a free Zoom account here: http://zoom.us/signup.
An entertaining and educational one-woman show based on the life and times of Harriet Tubman. Harriet’s harrowing and dangerous life unfolds as she tells the moving story of how she brought hundreds of slaves – and her own family – to freedom during the Civil War. Actress Christine Dixon tells the story of Tubman’s life in this dramatic one-woman performance. The story was originally adapted and directed by Morna Murphy Martell from the 1868 book by Sarah Bradford, Scenes in the Life of Harriet Tubman. The show includes original and reinterpreted music from period spirituals.

Want to learn more about Harriet Tubman and the Underground Railroad? Check out some recommended books, eBooks, films, and resources.

This program is offered with support from the White Plains Library Foundation and in conjunction with three months of Harriet Tubman related programming and events while the sculpture, Harriet Tubman – Journey to Freedom, is on display in Renaissance Plaza in downtown White Plains. April 1st – June 30th. Find out more about the Library’s other Harriet Tubman programs, and the events being hosted around the City.