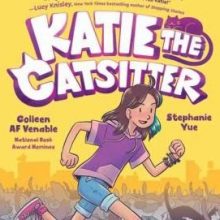 I’m a big fan of graphic novels but I’d never heard of this delightful tale until it was selected as one of the books that the 4th-7th grade team will be reading for the Westchester Library System Battle of the Books Summer League! Battle of the Books is a book-based trivia tournament for Westchester youth entering grades 4-12 in September of 2022. Unfortunately due to staffing issues, we will be unable to have the 4th-7th grade team we anticipated having. If you have a child interested in being on a 4th-7th grade team, please email Ashley Bressingham and we'll work to find an alternative option for them. You can also reach out to Ashley if you're interested in having your child participate on the 6th-12th grade team or if you have any questions about the competition.

In 12-year-old Katie’s New York City, Yelp is used to rate the superheroes that flit around and work to defeat any wrongdoings. It’s perfectly normal for heroes like the Eastern Screech to be interviewed on television regarding any crimes. For Katie, the school year is just finishing up for her and her friends Bethany as well as Jess. As the latter two are getting excited about spending the summer at Camp Bear Lake, Katie is bummed thinking how boring her summer will be stuck at home. She’s lived in New York City her entire life but unfortunately has never been to a camp since her and her mom aren't able to afford it.

In an attempt to earn the money for just one week of camp with her friends, she posts a sign in her apartment building asking her neighbors to hire her for a variety of jobs. It doesn’t go so well at first as Katie struggles to carry groceries up six flights or take care of plants with very specific needs. But then she lands what sounds like an amazing job – Ms. Lang from apartment 5B hires Katie for $30 an hour to watch her cats. Katie quickly realizes that this job is easier said than done since Madeline Lang somehow manages to have 217 cats in her apartment and they all get into some interesting and amusing hijinks!

As the summer goes on, Katie runs into friend trouble as Bethany becomes preoccupied with what’s going on at her camp and isn’t as interested in corresponding with her. Meanwhile, Katie becomes closer with Madeline as well as her plethora of cats and begins to suspect that her neighbor may be the Mousetress, the city’s most notorious villain. This is a really fun graphic novel and the ending of it really surprised me. I’m looking forward to diving back into Katie’s world and seeing what adventures she gets into in the sequel to Katie the Catsitter, Best Friends for Never, which was published recently!