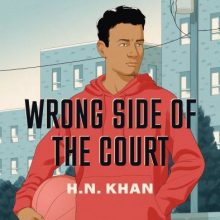 Gallant by V. E. Schwab
Grades 8 and up
Library Catalog / Libby
“The Merilance School for Girls isn't the worst of places to grow up, but for orphaned Olivia Prior, who has always felt like an outsider, it is an isolating one. For Olivia, who cannot speak out loud—only in a sign language that no one else at Merilance bothers to learn—and who can see the intangible ghouls of those who have died, life is a very lonely thing. She longs for the family she assumes is dead, clinging to a journal that once belonged to her mother and is filled with strange drawings and nonsensical babblings. When a letter arrives at Merilance inviting Olivia to come to Gallant, a mysterious old home, she may finally have found the family she's always wanted.” –Booklist

Okoye to the People by Ibi Zoboi
Grades 9 and up
Library Catalog / hoopla
“Zoboi’s exploration of Okoye and the Dora Milaje adds color to the popular Black Panther characters while highlighting the casualties of gentrification. Okoye has just joined the honored ranks of the Dora Milaje, and she is excited to represent her people while on a diplomatic mission to New York City. She expects opulence in New York and is surprised to come across poverty in Brownsville, Brooklyn. The more Okoye gets to know the teens who live in the neighborhood, the more similarities she sees between her people and the forgotten residents of Brownsville. When a real estate mogul introduces a dangerous new drug to destroy the area, Okoye joins the people and fights to save their community.” –Booklist

A Thousand Steps into Night by Traci Chee
Grades 8 and up
Library Catalog / Libby
“Otori Miuko is an unassuming, clumsy girl of the serving class whose life revolves around helping her father run their deteriorating inn until the day she is cursed by a demon when she stays out too long after dark. Suddenly banished from her village, Miuko has to find a way to reverse the curse and reveal the identity of the demon she now knows is hiding in the prince's skin. Awara is an oppressive place for the lower class, especially women, and although Miuko had always chafed against those boundaries, she misses them still when she has to strike out on her own.” –School Library Journal

Wrong Side of the Court by H.N. Khan
Grades 9 and up
Library Catalog
“Despite his small stature and his mother’s disapproval, Fawad Chaudhry dreams of becoming the first NBA player of Pakistani descent. Those ambitions are a far cry from the realities of life in Regent Park, a housing project in a rapidly gentrifying section of Toronto. Since Fawad’s father’s death in a traffic accident two years earlier, the family has been struggling more than ever to get by. When the older brother of his best friend, Yousuf, is killed on their street, Fawad’s world is once again shaken. When he begins dating Ashley, a well-to-do Chinese and White classmate from the nicer part of the neighborhood, he is introduced to a world of fancy dining and wealth he’d never before experienced. But when Ashley sees firsthand how tumultuous life for kids from Regent Park can be, Fawad begins wondering if he can ever be perceived as more than just a teen from the projects.” –Kirkus Reviews

Kiss & Tell by Adib Khorram
Grades 9 and up
Library Catalog
“A boy band’s gay megastar struggles under public scrutiny. Canadian boy band Kiss & Tell may have started out as a joke, but the five teens’ 2022 multicity tour is no laughing matter. While their first show brings feelings of euphoria, the spotlight shines a little too brightly on Hunter Drake when his ex-boyfriend posts their sexts on social media. The fans react negatively, prompting The Label to quickly revamp Hunter’s image with an updated wardrobe. The Label also plays matchmaker, suggesting a new beau: recently out Iranian American Kaivan Parvani from Kiss & Tell’s boy-band opener, PAR-K. Sparks fly, and the two boys decide to date for real. As Hunter, who is White, spends more time with Kaivan and less working on Kiss & Tell’s pivotal third album, tensions build among the band. Can they make it until the end of the tour?” –Kirkus Reviews

The New Girl by Jesse Q. Sutanto
Grades 9 and up
Library Catalog / hoopla / Libby
“Draycott Academy’s newest student is about to challenge the status quo, whether she likes it or not. Lia Setiawan transfers to the prestigious Northern California boarding school on a track scholarship, automatically setting herself apart from her wealthy classmates. Upon her arrival, a distraught Sophie Tanaka, who has a reputation for being a drug addict, is forcefully removed from the campus after punching a teacher. As if that wasn’t enough to give Lia doubts about her place at the school, she downloads the gossip app Draycott Dirt and is disheartened to learn that she’s the student body’s newest target for bullying. As she struggles to keep up her grades and maintain her scholarship, she discovers a cheating ring led by a crooked teacher, and her involvement in seeking justice takes a deadly turn.” –Kirkus Reviews

Her Rebel Highness by Diana Ma
Grades 8 and up
Library Catalog / Libby
Sequel to Heiress Apparently by Diana Ma
“Beijing, 1989: Following the death of a progressive government official, university students organize protests calling for democracy, equity, and freedom of speech. Lei, who is in her final year of secondary school, wants to join the student movement, but her personal situation complicates matters. As the privileged daughter of a wealthy, high-ranking Communist Party official, Lei feels complicit in the inequality and authoritarianism that the students are protesting; as a descendant of Wu Zetian, the only female sovereign in Chinese history, and heir to the empress’s rare art collection, Lei represents the imperial decadence loathed by the Communist government and protesters alike. Lei’s mother and twin sister, Jun, warn her that involvement in the demonstrations will threaten her father’s ability to protect both their family and the precious artwork, but Lei is determined to play a part in shaping the future of her country, especially after she meets earnest and intelligent Delun, a boy who is one of the movement’s leading members.” –Kirkus Reviews

The Last Laugh by Mindy McGinnis
Grades 9 and up
Library Catalog / Libby
Sequel to The Initial Insult by Mindy McGinnis
“The town of Amontillado is reeling. Felicity Turnado is missing. Kermit ‘Ribbit' Usher has gone viral, after partygoers recorded his drunken shenanigans and livestreamed them. Tress Montor is the only one who knows the truth of last night—that she murdered Felicity—but she's determined to keep the secret for the rest of her life. Which might not be that long, considering she is currently bleeding out due to being attacked by the panther that got loose from the Amontillado Animal Sanctuary. As Tress fights for her life against infection—and the guilt over what she has done—Ribbit is busy exacting twofold revenge: against the classmates who've ruined his life, and a revenge 18 years in the making against his own family.” –School Library Journal