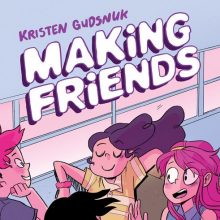 I can’t remember exactly when I discovered the first book in Kristen Gudsnuk’s Making Friends series. What I can recall is being immediately drawn to its bright cover as well as how loud I cackled while reading it. A few of the other youth services librarians at the White Plains Public Library can attest to this as many of them heard me giggling over this book while I read it at the Trove desk a few years ago.

I recently reread Making Friends after seeing it on the juvenile graphic novel shelves along with its sequel, Making Friends: Back to the Drawing Board, and Making Friends: Third Time's a Charm, the third in the series. Since I don’t want to spoil the second and third books, all I’ll say about them is I think it would be hard to finish the first book and not go on to read the rest!

In Making Friends, Dany finds herself fairly lonely as a seventh grader in a new school since all of her friends are in different classes from her. But then, she inherits what seems like a normal sketchbook from her Great-Aunt Elma. Things get wonky when she draws the head of her favorite cartoon villain, Prince Neptune, and just that body part comes to life. In order to feel less alone, she decides to draw a perfect best friend for herself and a brand new person named Madison appears!

As you can imagine, a magical sketchbook in the hands of a tween is perhaps not the best idea as Dany, Madison, and some of their other friends get into some hijinks. Things get even more complicated when Madison realizes that the sketchbook brought her to life and begins to resent Dany for it. On top of that, Prince Neptune keeps giving Dany really awful advice on how to get her middle school peers to like her.

I found this graphic novel oh so amusing and super easy to relate to. Dany really struggles between trying to fit in or to just be herself as she attempts to make new friends and survive middle school. I also really enjoyed the second as well as third book and I’m very excited to reread them again to jump back into this series this fall when the fourth book, Making Friends: Together Forever, is scheduled to publish!