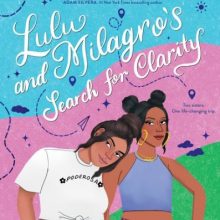 Some Mistakes Were Made by Kristin Dwyer
Grades 9 and up
Library Catalog
“After a year away, Ellis returns home to confront her past. Graduating from high school far from everything familiar was not part of Ellis Truman’s original plans, but she nevertheless ended up spending her senior year with her aunt in California. In Indiana, Ellis practically grew up with the Albrey family and their three tightknit sons, Dixon, Tucker, and Easton. Now, Tucker wants her to return home for matriarch Sandry Albrey’s 50th birthday celebration on the Fourth of July—but Ellis is dreading seeing Easton, as they haven’t talked since she left. Chapters alternate between past and present, and much of the story unravels slowly: How did she come to live with the Albreys? What caused Ellis to then end up in San Diego? What happened in her relationship with Easton?… The slow-build romance is swoonworthy, and young adult fans of Colleen Hoover seeking emotional devastation and unforgettable characters will find much to enjoy here.” –Kirkus Reviews

An Arrow to the Moon by Emily X. R. Pan
Grades 9 and up
Library Catalog / Libby
“Pan (The Astonishing Color of After) twines Chinese folklore—the story of Houyi and Chang’e—and Romeo and Juliet to deliver a unique contemporary novel about two star-crossed lovers. Luna Chang and Hunter Yee, both 17 in 1991 America, feel pressured by their Taiwanese emigrant parents: Luna’s supportive folks expect her to attend Stanford; Hunter’s tense family expects perfection following his father’s past mistakes. Both born on a night during which a star fell “in reverse,” then cracked in half before landing, the teens’ initial encounter seems clearly destined, leading quickly to budding attraction. But as they learn about their families’ feud, and subsequent meetings reveal that their physical interactions cause inexplicable phenomena, the strange appearance of fireflies, a supernatural wind, and an ominous crack that spreads across Fairbridge only bring them closer together, much to the horror of their parents.” –Publisher's Weekly

Heartbreak Symphony by Laekan Zea Kemp
Grades 9 and up
Library Catalog
“A story of surviving grief with the help of community. Full of music from the start, this novel follows two Chicane teens in San Antonio, Texas, who are navigating loss and self-doubt. Aarón’s mother died eight months ago and now he has an imaginary robot following him around. Not just any imaginary robot, though, but one that represents La Maquina, the public persona of Xavier López, a musician Aarón is strongly attached to—and someone missing for nearly a year who he can’t accept is possibly dead. Mia has grown up with domestic violence at the center of her world. She and her brothers create family bonds through invented rituals so they won’t focus on the parents who are gone: first, their mother who abandoned them, and soon after, their father, who was consumed by alcoholism until he passed away. Aarón and Mia come together with a pact to not give up on auditioning for scholarships to a prestigious music school, but their community may need their alliance for more.” –Kirkus Reviews

Dead Girls Can’t Tell Secrets by Chelsea Ichaso
Grades 9 and up
Library Catalog
“Savannah’s sister, Piper, is comatose after falling off a cliff, but was it really an accident? Piper seems perfect: smart, popular, and successful at everything she tries. Savannah is the soccer star of Grayling High, but she feels invisible, stuck in her younger sister’s shadow at home as well as at school. When Piper is found unconscious beneath a scenic lookout called Vanderwild Point, some of her classmates suspect she attempted suicide—but Savannah wants to figure out what really happened and whether it was her fault.” –Kirkus Reviews

Lulu and Milagro’s Search for Clarity by Angela Velez
Grades 9 and up
Library Catalog / Libby
“Sisters Lulu and Milagro are as different as it gets. Milagro is the sociable sister who cares more about fashion and her boyfriend, Pablo, than life after high school. Lulu is her awkward younger sister who wants to help save the environment and has her heart set on being a Stanford University High School Summer Scholar. Lulu is excited to be chosen to go on her high school's annual college field trip, a week of traveling across the country and visiting different campuses. Milagro, however, would rather be doing anything else. But it is through this trip and all its unexpected experiences that they will learn a lot about themselves and each other.” –Booklist

Genesis Wars by Akemi Dawn Bowman
Grades 8 and up
Library Catalog
Sequel to Infinity Courts by Akemi Dawn Bowman
“Stung by betrayal and loss, one teenager is determined to make the afterlife a safer place for humans. When Nami Miyamoto died, she found herself in Infinity—an afterlife controlled by malicious AI Ophelia and populated with beautiful, vicious AI Residents who hunt humans, using them as mindless servants—or worse. Nami’s attempt to destroy the Residents failed 10 months ago, leading to the loss of her friends, likely to one of Ophelia’s Four Courts, among them War and Death. Despite the skepticism of the remaining free humans, Nami is determined to save her friends and to make the afterlife a safer place for all those who have yet to die, including her younger sister. As Nami journeys through the courts looking for her friends, she learns that no alliance is certain, whether with Residents or her fellow humans. Nami is willing to be reckless if it means keeping her sister safe, but what will be the cost?” –Kirkus Reviews