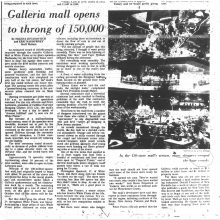 Two of the original five buildings in the Winbrook apartments (now officially called Brookfield Commons) have been razed and replaced. The three still in use will eventually meet the same fate.

The White Plains Mall will be leveled and replaced by a large residential and retail development called Hamilton Green.

And the Galleria Mall, which lost its anchor stores when Sears and Macy’s closed, may be demolished whole or in part for a redevelopment that would dramatically change its appearance.

As these buildings which were once fixtures in downtown White Plains disappear, we would like to keep a visual record of them in the Library’s Local History collection.

If you have any photos of the Winbrook apartment buildings, the White Plains Mall, or the Galleria that you would like to share, please let me know. I can scan them and make digital copies, or keep them in Local History’s physical collection if you’re willing to part with them. Note that these photos can include the inside as well as the outside of these buildings–for example, a picture of a child's birthday party at the McDonalds in the White Plains Mall, or of teens hanging out in the food court of the Galleria.

For a look back, here are three articles (click the images below to expand/zoom) from the old Reporter Dispatch about when Winbrook (July 1950), the White Plains Mall (October 1973), and the Galleria (August 1980) opened. 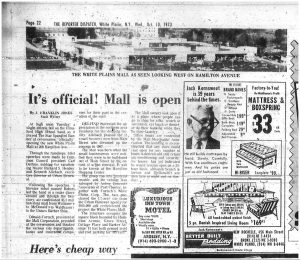 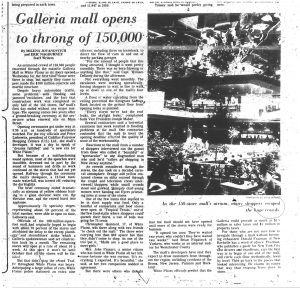