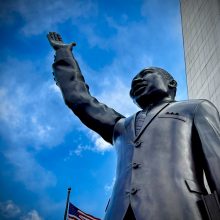 COUNTDOWN TO ETERNITY is a photographic tribute to Dr. Martin Luther King, Jr. documenting the last year of Dr. King’s life. The photographer, Benedict J. Fernandez has captured some of the most iconic images of the 1960’s and beyond. A distinguished educator, in the 1970’s he established the Photography Departments at the New School and Parsons School of Design and created the Leica Medal of Excellence. He also received numerous awards including Guggenheim and Fulbright Fellowships and has published a number of books.