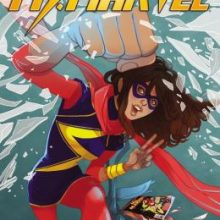 Everything You Need To Know About Ms. Marvel

Ms. Marvel is an amazing character and her comics are awesome. That being said, I am a little nervous about a live action show. Ms. Marvel has appeared in the animated series Marvel Rising: Secret Warriors (Disney+). I’m worried because Ms. Marvel is a shapeshifter, and from the previews it looks like they have pared down her powers. Ms. Marvel is Kamala Khan, a high school student in Jersey city. She has overbearing parents, an internal battle between her religion and American culture, and a crush on an older boy who works in a corner store. She is also an Inhuman. Her powers were awakened when the Terrigen Mist was released into the atmosphere. The comics explore her trying to balance being a teenager and having super powers. There are plenty of cameos too by Captain Marvel, Wolverine, Spider-man, and others. From the trailer, it looks like Kamala gets her powers from a family heirloom. Which means that her ancestors had powers as well. Her shapeshifting/embiggening powers have been turned into a glowing blue aura around her, which makes her look a bit like Captain Marvel. Here are some titles you can find at the Library to learn more about Ms. Marvel: