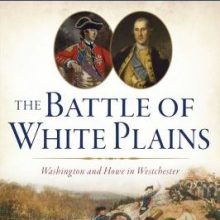 “I thought the Battle of White Plains deserves a much closer look,” he said in a telephone interview. “So often it’s given short shrift. It was not just a pit stop between the Fall of New York City and the Battle of Trenton.”

The conventional view is that the British won the battle since they drove General George Washington’s forces off of Chatterton Hill. But according to DeVillo, “It was far from a defeat for Washington’s army.”

The Library has two copies of The Battle of White Plains: Washington and Howe in Westchester. One copy circulates and the other is in the Local History Room.