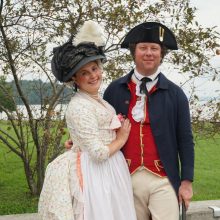 Chamber Music of the American Revolution

The 250th anniversary of the American Revolution is coming up and we are starting to celebrate the birth of our country early! Come listen to Ministers of Apollo perform authentic instrumental and vocal music that was popular during the period 1775-83 and learn more about how the music illustrates the lives of people during the conflict. Making use of period clothing, cosmetics and instrumentation, you will be educated, entertained and transported back to the American Revolution.

About Ministers of Apollo
The mission of Ministers of Apollo is to bring people back in time–just for a little while– through the power of music. How do we do that? For several years, we have been researching the sights and sounds of the late 18th century and have been faithfully recreating music, clothing, cosmetics, and hairstyles of the time period in order to give people a flavor of the 18th century. To even further bring our audience into the past, we use a combination of reproduction and original musical instruments, music books, clothing, accessories, and more.

This program is made possible with support from the White Plains Library Foundation.