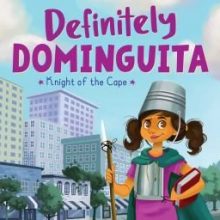 Knight of the Cape is the first book in the Definitely Dominguita series about a young Cuban-American girl who goes on adventures in her neighborhood, inspired by the classic books she reads and rereads to feel close with her abuela, who has moved to Florida.

In the first book, Knight of the Cape, Dominguita becomes the newest (and cutest!) knight on the block!

Dominguita (Dom for short) just wants to be left alone to read her books in peace – at the beginning of this book, she's reading Don Quixote. When a schoolyard bully taunts her that “girls can't become knights,” Dom is determined to prove him wrong (and also have a great story to tell her brother and abuela). With the help of her neighbors, Dom gets knighted, creates a suit of armor, and even finds a squire! Once she's properly equipped, she goes on a neighborhood quest to find good deeds to perform and villains to defeat – something big enough to shut up her bully. But what if her neighborhood is too peaceful to support epic knightly deeds?

The story is endearing, with Dom's adorable persistence earning her the help of multiple neighbors, and empowering – Dom struggles to find “big enough” good deeds to do at first, but her persistence pays off in an unexpected way; and any reader interested in patrolling their own neighborhood could do the same! Or if knighthood doesn't appeal, the rest of the series presents other fun roles to aspire to: pirates, swashbuckling musketeers, and detectives so far.

This series centers not only a love of classic books and how they can be such a point of connection and inspiration, but also the importance of community, friendship, and imagination!